Travels in Phoenix give insight into Navajo story

During World War II, the Navajos in the Marines created an oral code using their language, a code the Japanese were never able to break. Their contribution was kept secret for 40 years after the war, during which time they were not allowed to discuss what they had done. A room at the Arizona Capital Museum in Phoenix is devoted to the history of these Navajo "code talkers."
Two communications bunkers allow visitors to practice the code that had been used in most of the major battles for the Japanese-held islands in the Pacific.
Pictures of the code talkers as old men are displayed with their comments about their experiences. Noteworthy is the fact that all were assigned body guards, as it was vital that they not fall into enemy hands. Many came back with post-traumatic stress disorder reactions and found a cure in the traditional cleansing ceremonies of their shamans.
In 2000, President Bill Clinton awarded gold medals to the 29 code talkers who developed the code and silver medals to 300 Navajos who followed them in the South Pacific. A somewhat uneven view of their contributions to the war effort was given in the movie "Windtalkers" starring Nicholas Cage.
The Hopi, who are longtime rivals, were irritated by the attention the Navajo received, because they had also been Marine code talkers. Other tribes had also worked for the Army and Navy, but the Navajos got all the awards. The Kiowa declared war, and a group of aged warriors raided the offices of the Navajo Code Talkers Association and stole the medals. I presume they were returned.
One evening at the Elderhostel I was attending in Phoenix, a young Navajo man who makes traditional flutes played for us and told us religious stories of his people. He also enlightened us about John Wayne and director John Ford, who are appreciated by the Navajo because they made movies with the Navajos playing the Indians.
These movies introduced the public to Monument Valley and brought tourists to their reservation, where they proceeded to buy souvenirs, thus helping the Navajos build an industry on their rugs and silver items.
Only after 1980 did movies come onto the reservation, allowing many Navajos to see these old westerns for the first time. Because locals had been extras, the audience became very emotional when they saw themselves or their parents as young people. On first viewing these movies, people often cried.
Several of our presenters emphasized that the Navajos have a strong sense of humor. During the making of the westerns, Ford would tell the Indian actors to talk to each other in Navajo. This they did, and what they talked about was how silly white men’s ways were and what a strange person this John Ford was. Watching the movies and understanding the language the Navajos would break out in raucous laughter, to the bewilderment of the whites in the audience.
Another person much appreciated by the Navajos is Tony Hillerman, who writes mystery novels set on the Navajo reservation with two Navajo police officers as his heroes. His books are written from the point of view of the Navajo and treat the white man as an outsider. He makes much of the fact that the FBI and the government have little understanding of the Navajo way of life and how they often make things worse when they get involved. Hillerman’s characters, Joe Leaphorn and Jim Chee, give insight into the way Navajos look at the world. The author spends time with the tribe, and they have awarded him status as an honored person because of his friendly interpretation of their beliefs.
The 21 federally recognized tribes in Arizona have different worldviews, and one of the problems has been the ignorance of the government about these differences. For example, 63 percent of the Navajo men and 35 percent of the women have problems with alcohol, but only 3 percent of the men and 1 percent of the women of the Hopi have drinking problems. As a result, the Navajo have many more problems with fetal alcohol syndrome.
Both groups seem genetically predisposed to alcoholism, but the Hopi live close to each other with much immediate control of social behavior. The Navajo live more independently and are widely separated, so there is less social control.
At the Heard Museum of Native Cultures and Art in Phoenix, a section is devoted to the time when Indian children were removed from their families and sent away to white schools in order to civilize them. The government had figured out how much it cost to kill an Indian and decided educating them was cheaper.
Museum films indicate that the schools were run like the military. The children wore uniforms, marched to class and drilled regularly. Indian children were taken from their parents at 5 years old and returned at 14, supposedly with skills to make a living in a white man’s world.
The strongest impact of this history of imposed education was the recordings of people who had been at the schools. They shared what it was like to be ripped from their homes and forbidden to visit with their families. They were force-fed Christianity, beaten when they resisted the Word, forbidden to speak Navajo and fed poorly.
Dressed in cast-off white man’s clothes, when they returned to the reservation, they were strangers who couldn’t fit in. Many turned to drink. I understand that it is not unusual for visitors to leave that presentation at the museum in tears.
Despite this treatment, the Navajos were good Marines and made a major contribution to winning the war in the Pacific.
Navajos as a group did not take to the white man’s ways because our value system was so different from their own. Thus, most have chosen to remain on the reservation. 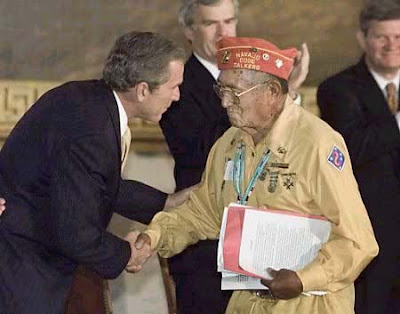 On July 26, 2001, the original 29 Code Talkers were presented with the Congressional Medal of Honor by President George W. Bush. This long awaited recognition occurred 56 years after World War II despite the fact that the Code saved thousands of lives. The Code had been de-classified in 1968.


Navaho code talkers have their own web site at www.navajocodetalkers.org/. http://akayola.com/author-pages/wayne-anderson

FORT GIBSON, OKLAHOMA
One of the disasters in our treatment of the Native Americans was called the Trail of Tears when 46,000 members of the Five Civilized Tribes, which included the Cherokee, Creek and Seminole, over a number of years were removed from the southern US and marched to reserves in Oklahoma. Of the 13,000 Cherokee forced on the Trail of Tears 5000 died. Indian Territory did not have the welcome mat out as the Osage had gotten there first and they were not happy with the interlopers.
Fort Smith in Arkansas was considered too far away to control the fighting between Indian tribes that was likely to take place. Fort Gibson was established in 1824 in preparation for the Civilized Tribes’ move into Indian Territory, and the Seventh Cavalry was charged with keeping the Osage and Cherokee from fighting with each other. 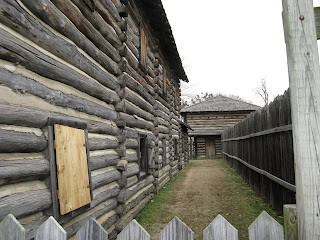 The Fort Gibson in Oklahoma I visited was largely reconstructed during the depression by the Works Projects Administration and was intended to be as close as possible to an authentic reproduction Rooms have furniture, cots, desks and other objects to give visitors some idea of what the original was like.
It would have been hard to find a worse place to build a fort. Colonel Matthew Arbuckle built it on the east bank of the Grand River just above where the Verdigris and Arkansas Rivers come together. The fort served as a supply point for materials intended for the Indians who arrived often at the point of starvation. The area was a bad one for disease, especially malaria, because it flooded regularly. In one period over 500 men of the troops stationed there died of various diseases.
The problem was more than just Cherokee and Osage conflicts because the Indians in the area were from various tribes that did not get along partly because of different lifestyles, some being hunter-gatherers and some being farmers. Other forts took over the duties of controlling the Indian conflicts.
Confederate troops captured the fort in 1861, but evacuated the post when a stronger unit of Union soldiers approached. This gave the Union Army control of the shipping of supplies on the three-river complex. The South was never successful in winning the fort back despite attempts. This is one place where they were outgeneraled.
Fort Gibson was a base for troops moving south during the Mexican-American War in which the US gained much additional territory from Mexico. Later it became a jumping off point for gold seekers during the California Gold Rush. It was vacated in 1890, rebuilt in the 1930s and made a national historic landmark in 1960. It is now a museum that interprets its role in the history of the development of the American West.
Because of the unhealthy conditions of the first fort, a second fort was constructed on a hill nearby, and here a barracks, magazine, hospital and bake house have been constructed along with a commanding officer’s quarters.
Although I did not visit the fort during a Living History event, re-enactors do occasionally put on demonstrations involving camp life, the last one being a Mexican War Encampment in early October. 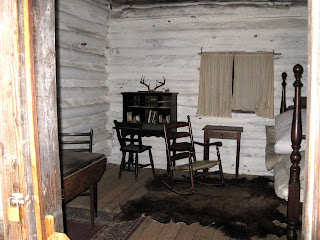 The rooms at the fort have period furniture.


https://www.amazon.com/author/waynepanderson
Posted by Wayne Anderson at 10:03 AM 5 comments: