I was certainly misinformed about the Seminole Indians of Florida.  Given the trouble they gave the American army I had thought they were a major tribe with lots of members.  Instead I found out they were a number of small bands from a variety of tribes who had gotten together to resist the invading and Americans and successfully fight them to a draw.


My first reality check was at the of in .  The Museum had eighteen sections each on a different aspect of ’s history and the combination provides a good coverage of the major events in the states history. The first section on the Calusa Indians shows their life style and how they had been killed off by the Spanish and the diseases that they had brought to .


In the early 1700s small bands of Creek Indians began making their way from and into .  Along the way these Indians joined with escaped slaves and refugees from other tribes to form a new group known as the Seminole.


A later section in the museum is given over to Seminole Wars in which the government attempted to get the Seminoles to move into lands west of the .  It emphasizes the leadership skills of Seminole chiefs who led the resistance.  In 1832 after the Treaty of Paynes Landing some left, but the others prepared for war.  In 1835 the Seminole leader Osceola led a vastly outnumbered resistance of about 1,400 warriors against an American army of 9000 led by Andrew Jackson.  The guerrilla tactics Osceola employed had a devastating effect against the forces. Our army was not equipped to deal with hit and run tactics.  We cheated.  When Osceola came under a flag of truce to negotiate he was arrested and died in jail a year later.  For some reason his body was buried without his head. 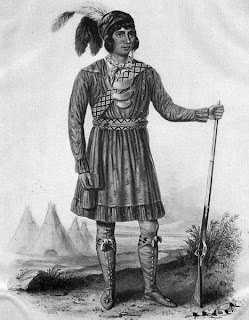 Other war chiefs took up the battle and continued the war until 1842 at which time many Indians were moved to Creek lands west of the . Others, however, retreated into the and the government gave up trying to conquer or eliminate them and left the fewer than 500 survivors in peace.  Estimates are that it cost the government is excess of forty million dollars to fight the Seminoles, a huge amount of money at the time and probably the most expensive Indian war in our history.


About 1,500 soldiers died in these wars and the Seminoles never surrendered and as a result call themselves the “Unconquered People.” 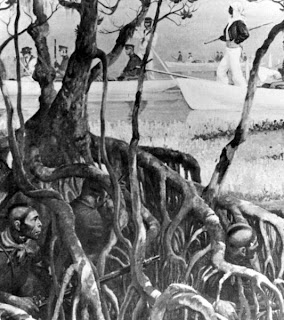 The Army hunts for Seminole Indians hiding among the mangroves.


Our next contact with the Seminole story was a week later at an Elderhostel in the Everglades when we were given lectures covering later developments in their history and taken on a tour of the in the .


We learned that in 1855 after the third and final Seminole war about 300 Seminoles found refuge in the .  The survivors developed a new culture built on the special features of the Everglades and .  Farms were built on the mounds the Calusa Indians had left behind.  Over time they began to interact with the whites in the area.  One of their money makers was to guide plume hunters (bird killers) into areas where there were still large numbers of wading birds whose feathers could be harvested for women’s hats. 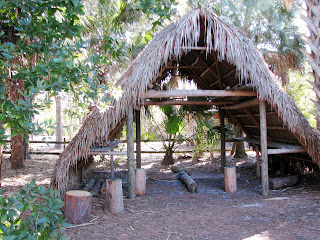 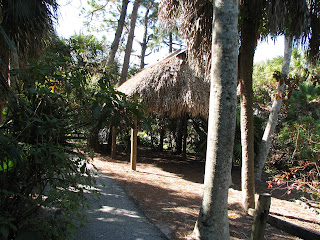 At the in the a small Seminole village has been recreated.


. By the 1920s, the Seminole women began to sell their traditional craft products such as woodcarving, basket weaving, bead working and doll making.  Men showed off their traditional skills such as alligator wrestling.   Because of the money made from casinos fewer Seminole rely on selling crafts for income.


Deaconess Harriet Bedell in 1936 became the savior of the Miccosukee and Seminoles by getting the Brighton Reservation designated.  Bedell was very interested in the Indians crafts and made arrangements with the Collier Corporation to sell Indian crafts.  The Miccosukee Tribe adopted her and gave her the name Inkoshopie, woman who prays. 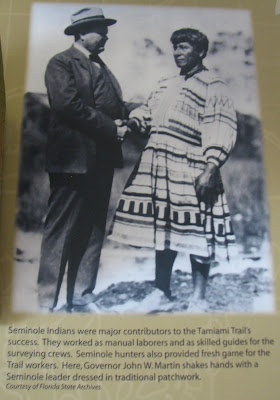 Picture taken at the Museum of the that also has a Seminole display.

About this time the Seminole cattle industry began which has made good money, and allowed them to expand into other areas. Since the 1930s they have gotten into the sale of duty-free tobacco, resort tourism.  In 2006 they bought the Hard Rock Café chain of restaurants.  In 1979 Seminoles opened the first casino on Indian land, a practice that has become a multibillion-dollar industry for tribes around the nation.  Income from the casinos in recent years funded citrus groves, ecotourism and sugarcane fields.


The grounds of the had some interesting displays.  The most interesting to me were two Indian camps.  One was a Calusa Indian structure and one a rebuilding of a .  They lived in small cypress pole huts called chickees, with palm-thatched roofs and open sides.


We also visited the smaller Museum of the that also has displays on the Seminole Indians.  Given time constraints we missed seeing what is probably the most complete museum about the tribe the .


Posted by Wayne Anderson at 9:44 AM No comments:

Lyndon B Johnson Library and Museum

Columbia Daily Tribune One wall of the Lyndon Baines Johnson Library and Museum in , celebrates “the thousand laws” of Johnson’s Great Society program. He praises the 88th Congress for “the greatest outpouring of creative legislation in the history of this nation.”

As our 36th president, Johnson knew how to pressure legislators into action. He worked unbelievably long hours and pushed, pushed and pushed. When he took office after President John Kennedy’s assassination on Nov. 22, 1963, the time was ripe for some serious progress in race relations and the treatment of the disadvantaged.

The museum shows Johnson as a fighter for civil rights, interacting with Martin Luther King Jr. The war on poverty made some advances, and the Head Start program improved both the nutritional and educational level of poor children. Other laws created Medicare, the National Endowment for the Arts and Humanities and the Job Corps. He encouraged space travel. Along with his wife, Lady Bird, he worked on environmental issues, and parklands were increased by 15 percent.

An introductory film gives his history from childhood to his death. The family expected he would become a politician. In fact, at his birth, his grandfather anticipated he would become a senator. It is interesting how early he got good positions where his talents could be demonstrated. He was 29 when first elected to the U.S. House of Representatives. He lost his first try at becoming a senator but succeeded on his second and was soon minority leader and later majority leader.

Despite his power over Congress, he never related to the American public in the same charismatic way that his predecessor, Kennedy, did. However, in several museum exhibits, Johnson’s skill as a storyteller is stressed, the most impressive being a life-size animated figure that uses his voice, moves its arms and lips, and blinks its eyes as it tells a joke that makes a point. 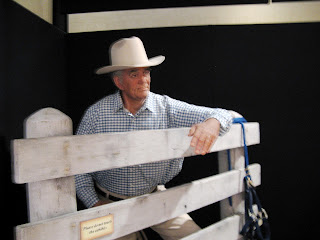 An automaton of LBJ at his Library and Museum tells stories.

Attention was taken away from Johnson’s many excellent accomplishments because of the ’ involvement in the Vietnam War. After Walter Cronkite said the situation was hopeless, Johnson felt he no longer had the support of the American people and gave the famous speech indicating he would refuse to run for re-election.

On a television screen at the museum, Kirk Douglas reads LBJ’s letters to Lady Bird, and Helen Hayes reads hers to him. In a letter during the 11-week whirlwind courtship, Lady Bird wrote, “I would hate for you to go into politics.”

Later, she kept a diary on tape; we could hear her voice describing how on the day of the Kennedy assassination she heard three shots, and their Secret Service man vaulted over the front seat, landing on top of Johnson, and threw him to the floor, saying, “Get down.”

On leaving the presidency, Johnson said: “I know I have given it everything that was in me.” He devoted 30 years to public service. Lady Bird called their retirement time the “milk-and-honey years.”

On the fourth floor is a sample of 80 state gifts from the 1,400 given to Johnson from around the world. The museum is the only free one among presidential museums because LBJ made arrangements to cover the costs for visitors. A reconstruction of LBJ’s Oval Office

One of my clearest memories is from November 22, 1963, walking up the steps of Parker Hall with a friend when Bob Callis came down the steps to tell us that President John Kennedy had just been shot.   Many old timers will probably be able to tell you where they were when they heard the news of the assassination.  The at in captures that moment of history along with the lead-in and the legacy.


Photographs, radio comments and television clips retell in detail what happened. The story starts with Kennedy’s 1960 presidential campaign and finishes with comments on his legacy.   The admission fee to the museum includes an audio tour wand that I appreciated as it provided additional speeches by Kennedy and commentary by others.


Visitors are introduced to the Kennedy White House, his programs and the brilliance of his speeches.  He was a very talented, charismatic president with great plans to change our relations with , advance racial equality and get us to the moon.  Then came the trip to covered here in electrifying detail.  Films show us the start of his drive with the crowds lining the streets.


Then we hear the shots and audio broadcast as the announcer realizes that something significant has happened.  We follow the story in the hospital room and then hear the announcement by an emotional Walter Cronkite that our president has died.  A movie shows the national and worldwide mourning and Lyndon Johnson taking the oath of office.


The “sniper’s perch” has been re-created in the corner room on the sixth floor of this building, then called the Texas School Book Depository.   The suspect, Lee Harvey Oswald, was a clerk at the Depository.   We can see the wooden book boxes that he allegedly used as a rest for his rifle as he delivered the three shots that killed Kennedy and wounded Texas Governor John Connally.  From this room we could view the path of the motorcade when Kennedy was hit.


Time is taken to thoroughly investigate the killing: weapons and various camera shots are shown and arguments are given as to whether there was a conspiracy or only a single shooter.  The first report says a single, another says a second shooter.  A final movie has Walter Cronkite as the narrator talking about Kennedy’s legacy and the tributes to him from around the world


On the seventh floor a display on Jack Ruby gives his background as a local nightclub operator and some guesses as to the reasons he shot Oswald.  A film, Jack Ruby: The Man in That Hat, shows a hat in slow motion, less than 48 hours after the assassination, moving toward Oswald, and then we hear the shots and see the action as Ruby is subdued.  This display is called a collections spotlight; museum personnel plan to take materials from their archives for special exhibits of which this is the first.


A historical marker, a red X on , indicates the spot where Kennedy was hit.  Some people stand on the spot to have their pictures taken (but given the moving traffic this is not recommended).  However, the crowds indicate that with modern technology this museum is excelling in reminding us dramatically of an important moment in history. 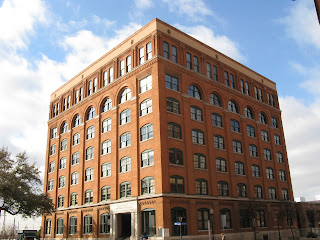