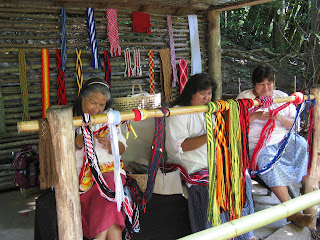 At the women demonstrate belt and sash weaving


The in Cherokee, is one of the best staffed rebuild villages or towns that I have visited.  Staffed by Cherokees Indians who are descendents of the group that resisted the move to by hiding in the mountains and arranging a special deal to stay in the area, they have reconstructed a very realistic replication of a Cherokee village from the late 1700s and early 1800s.  Although not very large it is heavily staffed with re-enactors who play their roles well.


We started our visit with a tour of the handcrafts and arts of the Cherokee as they have been done for hundreds of years.  A guide led tour starts every fifteen minutes, and it took us 40 minutes to visit the shops where these original crafts were being demonstrated.  At each point two or three workers chatted with us and explained what they were doing: we visited weavers, bead workers, mask and other utensils carved out of wood, basket makers, and arrow chippers.  The baskets are made from local wood and reeds and are expensive, 150 dollars for a small one, 300 for a larger one. These were definitely not made in prices. The arrow maker also demonstrated his skills with a blow gun that he made out of reeds.


Following the craft tour we were turned free to visit the various exhibits at our own speed.  Each building or display had a staff member to answer questions and make explanations.  For example one man was making a canoe out of a giant tree by burning and then chopping the ashes out.  The best presentation was of family life and war by a woman in the Council House where the business of the village took place. 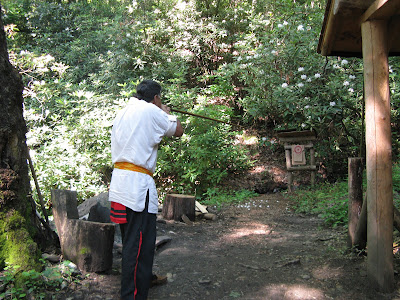 
A novel addition to the attraction is an on going story about a situation that almost ruined the relations between the English and the Cherokees.  Lt. Henry Timberlake was negotiating with them when a party of British Soldiers were spotted doing things they should not. We see this event re-enacted.  An hour later we go to the square where a battle takes place where the three English soldiers and their Inidan companion are killed.  Timberlake is taken by the Cherokees to the council hut where he will be tried for misleading the tribe.  An hour later we are the council house to see him tried and by clever detective work by the local trader is found not guilty since the supposedly English soldiers were French soldier sent to cause trouble. 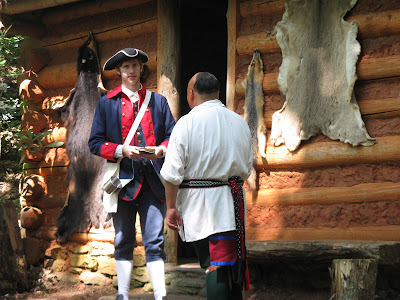 Lt. Henry Timberlake is informed some of the British troops are causing trouble in the area

The village is on a reservation so we were in Cherokee territory.   The Cherokee land owners rent their land so that outsides can run businesses in the area.  Most of the business we saw in the area was for the tourist’s trade, motels, restaurants, and gift shops and white water raft businesses.  The casino business is good and Harrods takes 52 percent of the profit and Cherokees get 48 percent that essentially pays for schools, hospitals, police and other services that most of us pay taxes for.  When the casino came in 1947 the government stopped its support of those services.  As a result the Cherokees now teach their own language both oral and written and expose their children to their history as a people.


Next to the village is a botanical garden that has plaques on trees and plants explaining what kind of tea could be made to cure which kind of illnesses.  Many of the teas seemed to be to treat different kinds of stomach disorders.  An herb garden is also along the walking tour.  The Cherokee medicine men claimed to have found a cure for everything except smallpox. 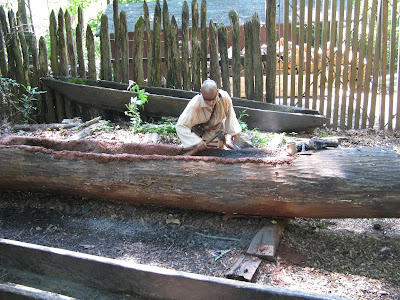 A Cherokee warrior turns a log into a canoe


Posted by Wayne Anderson at 8:13 AM No comments: 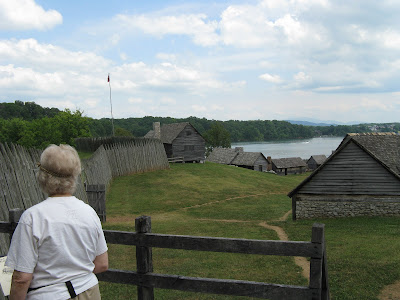 Reconstructed is 17 feet higher than the original because of the Tellico Dam.

I am often amazed in retrospect at how a series of small events can have a huge impact.  An illustration can be found in the history of the Fort Loudoun State Historic       Area in a state park on the banks of the in    Without the fort to protect the southern frontier for the English from the French from 1756-1760, we might all be speaking French instead of English. At the time the British and the French were fighting the Seven Years’ War in Europe, and here in we were in the middle of the French and Indian War (1754-1763).


The Cherokee had opted to fight on the side of their trading partners, the British; but they were afraid if their warriors went off to battle, other tribes might raid the camps where they had left their women and children.  Built at the request of the Cherokee, Fort Loudoun helped keep the Cherokee loyal to the English while English soldiers in the North were winning the battles that eventually gave them control of eastern North America and left us speaking English.


A 15-minute film in the visitor’s center gives a history of the fort and its eventual burning by the Cherokee.  At first the relationship went well.  The fort became a center for trading with the Cherokee exchanging food and skins for what they considered modern marvels: guns, metal cooking pots, beads, paint and cloth.


The relationship began to break down when the Cherokee felt they were not being treated fairly by the British. After some settlers killed some Cherokees, the Indians killed an equal number of settlers, and the relationship broke down.  The Cherokee believed that if some tribe killed a member of your tribe, they owed you a death that could be paid by any member of the other tribe.


A leader of the Cherokee was arrested under false pretentions, and other Cherokees were taken hostage and killed.  In retaliation, late in 1759 the Cherokee surrounded the fort and by early 1760 had starved them into submission.  The Cherokee negotiated to allow the British to leave the area in safety if they would leave the fort’s cannon and gunpowder behind.   The British buried the gunpowder and ruined the cannon.   As they marched away, the Cherokee accompanied them, but during the night disappeared.  The next morning the Cherokee attacked them and killed 24 (one report said 30) of the troops--the same number as their own tribal members who had earlier been killed.  The rest of the British, which included women and children were captured and some died in captivity, some were returned to the English and a few decided to remain with the Cherokee.


At this point the Cherokee burned the fort.  In 1936 the Works Projects Administration had an appropriation to restore the area.  After digging to find the former post holes, old plans and letters helped to start the rebuilding of a an accurate reproduction.  The Tellico Dam on the was built in 1979, the site of the fort was raised 17 feet, and the fort reconstructed.


We passed through the visitors’ center and walked about 100 yards to the fort with its small cannon, barracks, blacksmith shop and other buildings of the period.  To add to the ambiance there is a Cherokee encampment outside the gates and a barrier outside the wooden palisades of pine lotus with its prickly thorns that provide additional protection.


One weekend a month re-enactors recreate the period when the fort was in use.  The fort is located on an island in a highly attractive setting that also serves as the center of much boating and fishing activity. 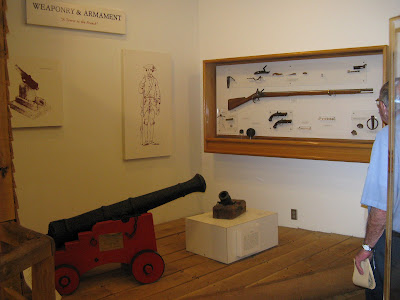 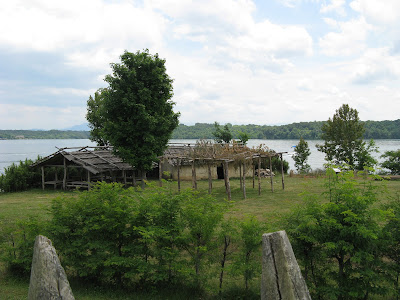 A reconstructed Cherokee Village outside of Fort Loudoun

https://www.amazon.com/author/waynepanderson
Posted by Wayne Anderson at 8:30 PM No comments: