When Franklin Roosevelt contracted polio in 1921, it seemed that his hopes of becoming president had been smashed, but in 1924 he discovered , and those hopes revived.  Although the waters did not cure him or make it possible for him to walk without braces, they did improve his spirit and gave him the opportunity to discover new forms of treatment and to help other polio victims.  He returned to Warm Springs frequently staying in the small house he designed, which became known as the Little White House.  Here as president he developed a number of the New Deal Programs, such as the Rural Electrification Administration, based upon his experiences and contacts with local people in this small out-of-the-way town.


died here in his favorite home in 1945.  While his portrait was being painted by Elizabeth Shoumatoff, he quietly fell forward.  He was moved to his small bedroom where he died and was embalmed.   Our guide explained that his smoking had probably contributed to his death.  He had for years smoked three packs a day of unfiltered cigarettes but had been slowly cutting back.  The furniture throughout the house has burn marks from his cigarettes.


The furniture and equipment have been left as they were the day he died.  Constructed with local materials, the furniture was built by a company owned and developed by his wife Eleanor.   Our guide pointed to a special feature of the bathtub that allowed Franklin Roosevelt to rescue the soap when it slipped away from the soap dish.  In the dining room/office he had a recording machine as part of his radio/record player.  His secretary Missy Leland, whose tiny bedroom is included in the tour, would type the material promptly.


Eleanor seldom visited him here, but her small room was frequently used by their children and other guests.   Present when he died were his daughter Anna and Lucy Mercer Rutherford, a factor that added to Eleanor’s grief as she had been told he was no longer in contact with his former mistress.  Although he and Eleanor had reached the point of separate bedrooms earlier, they had continued to be very supportive of each other, and she was in many ways his eyes on what was happening in the country.


Originally the basement of the house had been used as a museum.  Now a new modern building has been constructed with a large theater that shows a 20-minute film of his life with emphasis on his connection to Warm Springs.  The museum is similar to the standard presidential museums giving the story of his life with many pictures, video clips and excerpts from his fireside chats and other speeches.   Brief bios are given of the people closest to him\-- many such as his cook, secretary, and advisor, Louis Howe, he had with him for years. His patio furniture, part of his stamp collection and an impressive collection of canes sent to him by admirers are also on display. 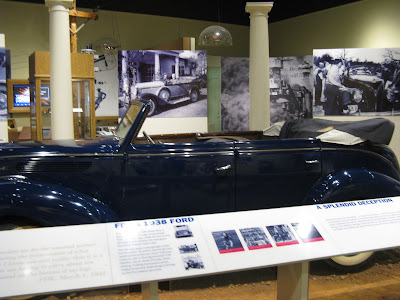 
developed or invented some equipment, such as hand controls for cars, making it possible for him to drive.  One of the cars, a ‘38 Ford is in the museum and a ‘40s Willys roadster is in the garage at the house.   He enjoyed driving around the area talking to the locals. The guide said he spent time showing the farmers how to rotate crops and use new methods to improve their lives.  We missed seeing, Robert Prater, a re-enactor who is sometimes available at the house and who appears around the area in role.


After ’s death an editorial in the New York Times stated: “Men will thank God on their knees a hundred years from now that Franklin D. Roosevelt was in the White House.” 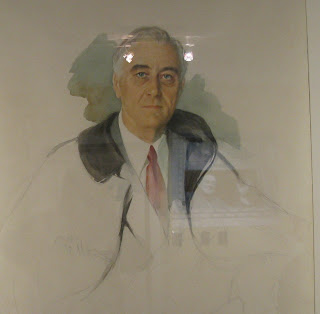 The unfinished portrait of that was being painted as he dropped forward dead.