PHOENIX, Ariz. - Ever since our visit to the Guggenheim Museum in New York City many years ago, we have been "looking in the Wright places" to view more of the buildings by America’s foremost architectural genius. When we discovered an Elderhostel in Phoenix that had a program on Frank Lloyd Wright, we signed up. Twelve of his buildings were constructed in this area, which includes Scottsdale and Tempe.


When Wright died, he left designs for structures that had not been built. One was his plan for Southwest Christian Seminary in Phoenix. His blueprints included administrative buildings, a library, a theater and faculty homes. As the seminary ceased operating, the plans were set aside. In 1971, the administrators of First Christian Church in Phoenix, aware that the plans included a chapel, requested and got permission from Wright’s widow to use those plans for their church.


If he had lived, Wright would have enjoyed hearing that Harold Wagoner, the former dean of the Church Architects Guild of America, called the building, completed in 1973, one of the 10 best church buildings in the United States.


Wright used a triangular roofline that gives the appearance of praying hands. The walls of the church are made of large, reddish, native stones set in rough concrete. The building is supported by 23 triangular pillars of concrete and steel that he envisioned as desert trees.


As we finished walking through the narrow entrance with its low ceiling, we could feel the impact of entering the open, glass-walled, 800-seat worship center. An unusual feature is the light-blue carpet that covers the floors and pews.


Another creative feature is the 120-foot, free-standing bell tower placed near the 77-foot triangle-shaped spire rising from the roof. As we passed churches in the area, some of them with triangular roofs, we had the impression that Wright had been an inspiration to other local builders.


Next we toured the Biltmore Resort in Scottsdale, a 1924 project Wright was involved with. It is still debated how much input he had on its design. According to his biography, it was not enough to suit him, as he said, "I was powerless to prevent this tragic waste."


Still, it is an attraction to visitors because it reflects some of his ideas. The lobby, the bar and the cottages probably are his designs. His son, Lloyd, developed the textile block system widely used in the main building.


As we toured the Biltmore Resort, we were aware that we were in the presence of money. Partly it was the $350-a-night rates, but in addition the guests looked like people who took having unlimited funds for granted. U.S. presidents typically stay here when they are in the area; one hallway has pictures of the presidents who checked in.


The Grady Gammage Memorial Auditorium at Arizona State University in Tempe is the largest Wright building in the area. The plans started out as an opera house in Baghdad for the king of Iraq. The king was assassinated, but Arizona State University was looking for a big auditorium. Its gaudiness is unusual for a Wright production - it has been compared to a giant pink wedding cake. It seats 3,000, and the acoustics are said to be excellent.


As part of an Elderhostel, we were taken on a bus tour of the communities of Phoenix, Tempe and Scottsdale. We’re afraid other Wright houses got lost in the commentary: "This is Glenn Campbell’s house," "Kitty from ‘Gunsmoke’ lives here," "That home is 30,000 square feet," and "That home on the hill cost $14 million."


Not built and highly controversial was the state Capitol building designed by Wright when he was 88. He said, "I present a true 20th-century economical building of a character suited to grace the Arizona landscape." Critics found it "full of glittering spires and geometric filigree." It probably would have gone way over budget and had a leaky roof, common characteristics of Wright buildings. On the other hand, it might have been the most beautiful and unique Capitol in the world.


Our lecturer one evening was Frank Henry, an architect who knew Wright and who works in the archives of the Wright foundation. After hearing Henry’s talk, one certainly would have been led to conclude that Wright was America’s greatest architect of the 20th century and, if not by his own definition, the greatest of all time. 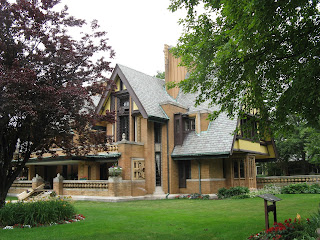 Frank Lloyd Wright used his home in , as a laboratory for exploring innovations that caused a revolution in architecture.

What a special treat it was for us to visit the Frank Lloyd Wright House and Studio in The town has a historic district with a major collection of buildings designed by ’s most-famous architect.


Wright lived in for almost 20 years between 1889, when at the age of 23 he first built the home, and 1909. It was the birthplace of his architectural philosophy and of many of his design concepts. He lived here with his first wife and their six children and worked constantly on modifying the house and studio, both now restored as they appeared in 1909. Throughout his life, his homes evolved as he used them as laboratories for exploring innovations that caused a revolution in architecture.


Our volunteer guide was knowledgeable and enthusiastic about Wright’s work, but we found it interesting he talked only about Wright’s life during the time he lived here and mentioned nothing about his flamboyant attitude, affairs, other marriages or later work. The guide ended his spiel with no explanation of why Wright left his wife in 1909. Because we give talks on Wright, we were aware of the scandal caused when Wright left his debts behind and fled to with Mama Borthwick Cheney, who was said to be the love of his life. Later, another source suggested that guides were encouraged to keep the focus on Wright’s life at .


When Wright began his work, wealthy people had a mindset that a house should look like a typical Victorian mansion. Wright had different ideas, and slowly others began to see his work had advantages over the old style. Our guide was very knowledgeable about the different innovations in the house. Victorian mansions were typically placed in front of the yard, and Wright’s house and studio are placed some distance back. They have a whole different use of windows for lighting, and the interior has much open space flowing easily from room to room. In a Wright home, there is never a parlor, a room in the past only opened for visitors, but instead there’s a game room for the kids and parties. He also designed the furniture, some of which looked uncomfortable. One innovation was a bench that doubled as storage for kids’ toys.


Some innovations were strange. For example, a piano was built under the staircase so the steps had to be lifted to allow the music to be heard. Some rooms are small, keeping with Wright’s philosophy that buildings are for people and should be intimate. Our tour group of 16 pretty well filled the rooms.


His ideas appealed to some of his neighbors, who began to use him as their architect, and this got him into trouble with his boss in . Wright was fired for moonlighting.


His studio is a wonder with its beautiful rooms and use of wood and light. It was hard to imagine something this modern was designed in 1889. He had a private entrance from the house. Originally, his studio was open to the street, but so many people wandered by and tried to enter that he put up a wall.


The streets in this area of are filled with old Victorian houses with Wright-designed houses liberally distributed among them. We will tell you about them in our next column.

Posted by Wayne Anderson at 1:51 PM No comments: 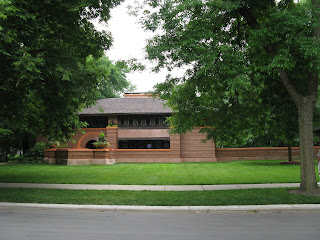 The Arthur B. Heurtley house, built in in 1902, is one of Frank Lloyd Wright’s early prairie-style houses. Wright designed it to blend naturally into the landscape.


When we’d finished the Frank Lloyd Wright home and studio tour in , we knew the walking audio tour of the surrounding historic district would be a must.


Happy to follow the advice of Patricia Schultz’s list of “1000 Places to See Before You Die,” we took this tour of the world’s largest concentration of buildings designed by Wright.


The audio segments recounted the evolution of Wright’s work during the first 20 years of his architectural career. Covering about eight or nine blocks, the walk includes 20 buildings; 11 houses and the Unity Temple were designed by Wright, and several other homes were designed by competing architects of the times, giving us a chance to see the contrast of styles.


Several of Wright’s early homes, such as the Robert Parker House built in 1892, looked typically Victorian except for some minor changes, such as the different-colored shingles. Three houses together on this street are known as Wright’s bootleg houses; because he was forbidden by contract with Adler and Sullivan to work independently, he was eventually fired for surreptitiously designing this work.


All of the houses on the tour look expensive, but some are more expensive than others. The cheapest of the houses Wright designed, the Laura Gale House, with its gravity-defying terraces, looks like a smaller edition, without the waterfall, of his famous Fallingwater house in .


We were especially impressed with the Arthur B. Heurtley house. Built in 1902, it is one of his early prairie-style houses. With its variegated brickwork, the house blended naturally into the landscape. Details we saw here would appear in many of his later works: a fireplace in the center of the house, bands of casement windows, overhangs and balconies.


The narration on the iPod focused on what Wright was trying to do. The outside shells with modest, almost hidden entries were attractive and fit naturally into the beautiful settings of trees, shrubs and flowers. A well-lit inner space with an open floor plan with abstract geometrical shapes was extremely important to Wright. The houses on the tour are privately owned, but some of the interiors are open to the public during the mid-May Wright Plus Tour.


Several of the houses on the tour by other architects are standard Victorian houses of the period but bigger than average. Several architects had added some features that make them more like a Wright-designed house. The Charles E. Matthews House, built in 1909 by the architects and Watson, was a radical change from the usual Victorian house.


Wright considered the , a Unitarian Universalist church built between 1905 and 1908, his masterpiece and called it his “little jewel.” He used one material, reinforced concrete, in designing the cubist building.


Some architects consider it to be the first modern building in the world; perhaps that’s a little overboard in terms of claims, but it does show the mystique connected with Wright’s work.


In the National Register of Historic Places, the district is called “undoubtedly the largest concentration of early modern architecture to be found anywhere in the world.”0


Posted by Wayne Anderson at 1:43 PM No comments: