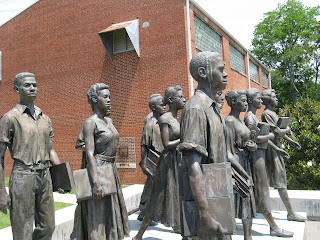 Statues memorialize the black students who integrated the high school in Clinton, Tenn. Many museums around the country feature exhibits that shed light on struggles during the civil rights movement.


The U.S. Supreme Court’s 1954 decision in Brown v. Board of Education — that school segregation was illegal — opened the door to years of protests against the civil rights movement.
Some progress has been made. Lunch counters are now open, separate water fountains no longer exist and our sports teams and movie screens are alive with black faces.


Bottom of Form
But 61 years later, educational and employment opportunities still are biased against blacks. To understand why the battle has been so hard, we need to understand the depth of racist attitudes, and one way to do this is by visiting museums dedicated to recording this fight for equal rights.

At the Birmingham Civil Rights Institute in Birmingham, Ala., one gallery focused on the angry responses of locals to what they saw as an invasion by outsiders who didn’t understand their way of life. Their responses show they didn’t realize how prejudiced they were.

Examples in displays about the process include comments that “blacks were happy — they sang and had a good time until the northern interlopers came in and riled them up” and “blacks were a primitive people who were not fully ready to be integrated.” Particularly nerve-wracking to us were the clips of Southern governors talking about how states should be left to have their own laws, and that the national government had no right to interfere with their traditions.


In Kelly Ingram Park in Birmingham, one statue depicts a policeman holding the leash of a dog lunging at a black youth. A little farther on the path were three angry dogs leaping out of the sides of two walls. Even though the animals were sculptures, Wayne got cold chills when he walked between them. On the audio recordings available at the park, a woman who had been a young girl at the time talked about how the teenagers built up their nerve to face the dogs, the high pressure water hoses and the beatings.
In the Little Rock Nine Museum in Little Rock, Ark., we saw how the black students were insulted and threatened, kicked and tripped and shoved in the halls and against lockers.

One of the nine, Elizabeth Eckford, took to carrying her notebook in front of her with pins sticking slightly out, which did, after the first attack, avert further frontal attacks. The books of the nine were stolen and ripped. Pencils and spit balls were thrown at them. Ink was squirted on their clothes. Even white students who might have been sympathetic didn’t dare to do anything to protect them for fear the anger would be turned on them.


The Rosa Parks Museum in Montgomery, Ala., put us in the presence of a real bus equipped with amazing technology. We could see and hear through the windows the people on the bus — blacks in back, whites in front. The bus stopped and an image of Rosa Parks stepped on, and we watched the situation develop that led to her arrest. The police were called and we saw her being arrested.
Even when a community accepted school integration, problems arose. In Clinton, Tenn., the white students by and large were very cooperative, especially the student leaders and members of the football team. The black students gained prestige when one of them beat the fastest white runner.


That peace did not last. Outside anti-integration activists led by New Jersey white supremacists John Kasper and Asa Cart arrived to foment violent resistance to integration. In one of the rooms, a screen shows a picture of the original high school that dissolves to then show a mess of bricks and plaster — the result of three massive explosions on Oct. 5, 1958. The school was back in operation — and still integrated — in a building near Oak Ridge a week later.
Our visits to civil rights museums have given us a feeling for the depth of the anger at the attempts to legislate for blacks — a depth that even today prevents equal opportunities for all. 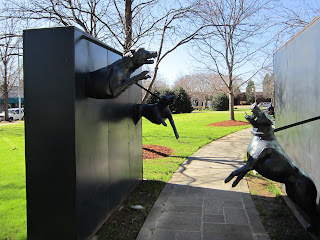 
During Black History Month, we learned about the beginning of school desegregation at the Brown v. Board of Education National Historic Site in Topeka, Kan.
The site is built around the reconditioned Monroe Primary School, which became the focus of the lawsuit that resulted in the U.S. Supreme Court’s 1954 landmark decision, which concluded that segregated education denied “equal protection of the laws” under the 14th Amendment.


Bottom of Form
It was clear that segregation had a negative effect on black children — they were not treated as equal citizens. It also was apparent that “separate but equal” schools were not equal. For example, one county in South Carolina budgeted $43 for each black child in 1951, compared with $179 for each white child.

The court’s decision started not only the campaign to integrate schools throughout the country, but also started the breakdown of segregation at lunchrooms, restrooms, water fountains, hotels, buses and swimming pools.


Our brief tour was almost immediately interrupted by a group of protest-sign wielding third-graders marching and singing “We Shall Overcome.” Later, a young female park ranger, who had just finished a session with her own group of third-graders, explained that third- and seventh-grades in the area surrounding Topeka routinely come here to learn about the civil rights movement.
Because of hostile conditions in the South, many blacks had moved to Kansas, where segregation in elementary schools continued in large cities. Oliver Brown, father of Linda Brown, who was a student in the classroom we visited, became the chief plaintiff in a lawsuit that rolled five cases from around the country into one.

The two lead attorneys were Charles Houston and Thurgood Marshall, the architects of the NAACP’s legal strategies. Marshall later would become the nation’s first black justice on the Supreme Court.


The classroom has been rebuilt and furnished the way it had been as a kindergarten classroom in 1951, and information about how classes were run in those days is given. The most informative room for us was the school’s auditorium, which had three large screens. On one, a black instructor held an interactive discussion with a teenager about the history of segregation and the fight for constitutional rights.
Their discussion covered the post-Civil War years, during which laws were developed that relegated blacks to separate facilities — or barred them altogether. Their discussion also took us to the aftermath of the Brown decision. All the while they were discussing these issues, a series of historical scenes on those topics played on the other screens.


Other classrooms have become display areas, with films, pictures and newspaper spreads giving a history of the problems that were encountered in the movement for integration. One of the most compelling displays included moving pictures projected on either side of a long hallway. As we walked, we saw people shouting, protesters being attacked and southern leaders loudly giving their resistant messages — truly frightening.
Backlash to the court’s decision was widespread. In Virginia, some administrators chose to close schools rather than opening them to blacks. By 1964, only about 1 percent of blacks in the South were attending school with whites. Despite the resistance, it was clear to us during the visit that the Supreme Court’s decision in this case forever changed the way Americans viewed equality.


The displays in the final room show that resistance to equality still exists, and that while many blacks have taken advantage of improved opportunities, we continue to have much economic disparity and bigotry.


amazon.com/author/waynepanderson
Posted by Wayne Anderson at 10:41 AM 3 comments: 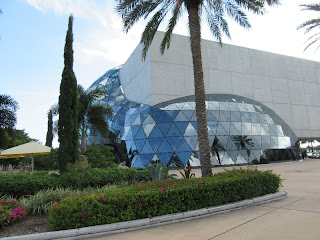 The Salvador Dali Museum is housed in a stunning $30 million building featuring a 75-foot entryway made of thick blue glass, which covers the spiral staircase that takes visitors to the main display area on the third floor.
In 2006, I wrote a column about the Salvador Dali Museum in St. Petersburg, Fla. The museum promoted itself as the top-ranked museum in the South.   Five years later, the increased threat of hurricanes caused a move from the old building to a stunning new $30 million building protected by 18-inch concrete walls on the downtown waterfront. The 75-foot entryway made of thick blue glass covers a spiral staircase that takes visitors to the main display area on the third floor.
Bottom of Form
Need an account? Create one n
The docent who led our tour of 20 visitors was an expert at helping us understand what we were seeing.
Dali (1904-1989) was a Spanish surrealist painter noted at times for his grandiose manner. He has been credited with such statements as, “Surrealism is destructive, but it destroys only what it considers to be shackles limiting our vision.”
Our guide focused much of the tour on four giant paintings. These paintings have realistic-looking people and objects, but Dali buried pictures within pictures that only became clear for us when they were pointed out. A picture of a female nude — modeled by Dali’s wife — standing in front of a wall, for example, became the face of Lincoln only after our guide pulled out a mirror and held it some distance away. Could that be the same picture? Finally, by standing about 20 yards from the painting and squinting our eyes were we able to see the president’s visage.
“The Hallucinogenic Toreador” is one of Dali’s greatest double-image paintings. We first saw a multitude of Venus statues inside a large bullring. As the docent talked, other images began to appear. The shadows on the Venus’ stomach form a chin and lips, with her left breast becoming Toreador’s nose and her face his eye. The dead bull’s head appears at the feet of the Venus statues.
The most beautiful of the four paintings is “The Discovery of America by Christopher Columbus.” In the largest painting, at 161 by 122 inches, the realistic figures of Columbus and his crew towing a boat ashore are crowded with many other images. Two figures of Christ on the cross seen from above as well as a variety of other religious figures appear when you know where to look for them.
“Homage to Crick and Watson (discoverers of DNA)” is a metaphor that we had some trouble grasping. God is seen sitting in sky connected to a large cloud like a Holy Ghost, who is reaching down and touching an injured Jesus.
During our previous visit, we spent more time with the museum’s collection of 96 oil paintings, more than 100 watercolors and drawings, various graphics, photographs and sculptures. Both times we found this a stimulating and fun experience.
We had lunch at the Dali dining room that serves its food in the Spanish style. It is on the first floor next to a large gift shop and book store.
During our most recent visit, there also was an M.C. Escher show on display. He delights viewers with his visual illusions and puzzles such as two hands drawing each other, impossible staircases that take the viewer up and always end up back at the beginning, or reptiles becoming birds as they merge into each other.
A. Reynolds, who purchased the paintings in this museum, became a close friend of Dali’s. When Reynolds wanted to give them to a museum, he could find no museum that would meet his requirements: that all were to be displayed and none was to be sold. When officials in St. Petersburg learned of this, they offered a building on the waterfront and agreed to his conditions. In its new home, the collection continues to be one of the most important in the South — if not the absolute top museum.


amazon.com/author/waynepanderson
Posted by Wayne Anderson at 10:10 AM 2 comments: