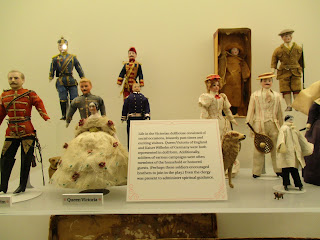 A collection of Victorian-era figures, including one of Queen Victoria of England, are on display at the National Museum of Toys and Miniatures on the University of Missouri-Kansas City campus.


In last week’s column, we discussed the amazing miniatures at the recently renovated National Museum of Toys and Miniatures on the University of Missouri-Kansas City campus. This week, we would like to share with you our visit to the museum’s collection of more than 46,000 toys — one of the largest collections in the United States.
Mary Harris Francis, who in 1982 co-founded the museum and provided the original toy collection, was attracted to toys that had been handmade and cherished. More than 2,000 people approached her with their own childhood toys, which allowed her to assemble the largest toy collection in the Midwest.


Bottom of Form
So, in a sense, this part of the museum became a community project.

We were able to explore not only memories of our childhood toys but also those of long-past and recent generations: dolls, stuffed animals, trains, pedal cars, airplanes, games, soldiers and more. Individual stories were attached in many displays. Even poor kids like Wayne managed to get some toys that added to the joys of his childhood.


The carpenter tool kit reminded him of the best Christmas present he ever got as a child: a tool kit — similar to an adult’s tool kit — with a real saw, hammer, level, planer and other working tools with which he could make real objects.
Carla, moved by the Raggedy Ann doll display, discovered that the Raggedy Ann stories were based on a rag doll belonging to Marcella Gruelle. Her father wrote and illustrated books based on stories he had told her when she was ill — sadly, she died at the age of 13.

The videos and written commentary throughout the museum stressed how toys give children the opportunity to learn adult skills and behavior.

Jimmy Stewart, narrating a film about pedal cars, explained how schools were using the cars to teach children how to obey motorist and pedestrian traffic rules.


The film was made at a time when you stuck your arm out the window to give the driver behind you a clue as to where you were going to turn.
He suggested that as children learned the rules, the parents tended to pay even more attention to the rules.

Other displays illustrated how dolls and doll houses allowed girls to try out the roles and responsibilities they eventually would assume as adults.


Modern toys, however, suggest many other possibilities to girls, and they now can explore scientific occupations and a broad range of other opportunities that are open to them.
The doll houses covered a range of years and cultures.

Looking at the older Victorian home, we could see the servants, the fancy dress of the home owners and the military uniforms of the visitors along with the overstuffed furniture and lack of modern appliances.

Comfort dolls such as Teddy bears are on display alongside Barbie and G.I. Joe.


The cast of “Star Wars” has its own display case, as does Teddy Roosevelt on a hunting expedition in Africa.
In 1971, the microchip revolutionized the toy industry by introducing toys that could walk and talk.


When we visit our 14-year-old granddaughters, we often notice they are playing games on their iPads in bed before breakfast. 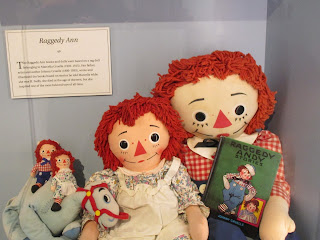 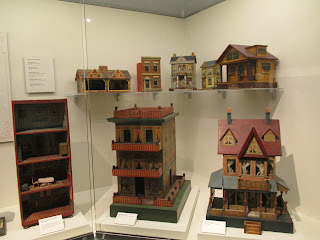 A range of doll houses 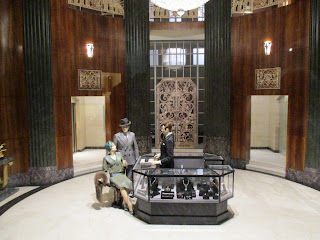 A series of intricately detailed miniatures, such as this scene depicting a couple at a jewelry showroom, is on display at the National Museum of Toys and Miniatures on the University of Missouri-Kansas City campus.


We were pleasantly surprised to discover the National Museum of Toys and Miniatures in a magnificent 38-room mansion on the University of Missouri-Kansas City campus.
In 1982, the original museum combined the toy collection of Mary Harris Francis with the miniatures collection of Barbara Hall Marshall. A capital campaign beginning in 2012 resulted in an $11 million renovation, and the museum reopened last August.

In an introductory film to the museum’s miniature section, Marshall discusses her collection and the joy it gave her to share it with others.


When we entered the floor of miniatures, we were greeted by a chair and desk. Next to it was a stand, which held an identical chair and desk 1/12 the size of the original. This prepared us for what we were about to see — carefully created objects and scenes that were perfect copies of the original.
The exhibits brought many smiles and occasionally a sense of awe, such as when we looked through microscopes and saw a panda painted on a grain of rice or saw a figure sculpted from a toothpick. How in the world did they do that?

We gained some insight into the work by watching several films with artists demonstrating how they created miniature objects. Taking a real ceramic plate, one artist created a miniature version in a process that included not only copying the intricate design but firing it for hours in a kiln. She also demonstrated how she made a reproduction of a master painting the size of a postage stamp using egg tempera paint.

Some of the scenic objects include Abraham Lincoln’s log cabin, a Boston Beacon Hill mansion, an art deco jewelry store with a rich-looking man, a beautiful woman and a very formal-looking sales clerk. If we had been looking at realistic paintings of the scenes, we would have been impressed, but it was even more impressive that we were looking at the scene created with intricately crafted objects in miniature.

It even struck us that we could be doing a little world-traveling as we walked through the rooms: a bedroom from a mansion in Tudor England, an Italian Renaissance studio and Louis XV’s study at the palace at Versailles were among the scenes on display.

But, of course, equally impressive were a miniature set of dueling pistols and, nearby, a violin shop recreated in the inside of a violin. We also saw works of art from the Metropolitan Museum of Art and the Nelson-Atkins Museum of Art on a scale of 1 inch equal to 12 inches.


We suspect some of the children visiting saw the exhibit as merely a collection of dollhouses without appreciating the meticulous detail work that was needed to create the objects and the rooms. They seemed much more interested in the toys on the second floor, an exhibition that we will discuss next week. 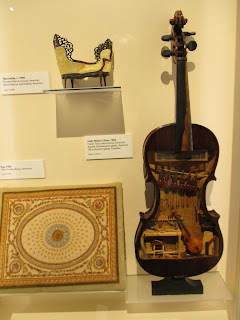 A violin shop within a violin 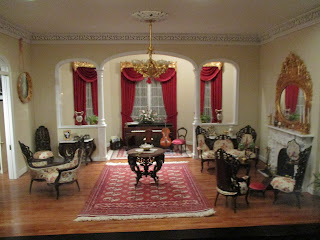 
amazon.com/author/waynepanderson
Posted by Wayne Anderson at 11:17 AM 3 comments: