Big things in a small town 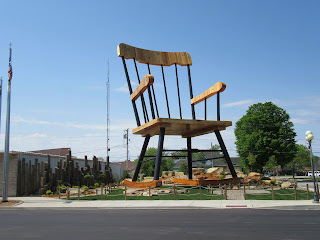 The largest chair in the world is Casey, Illinois


How did residents of a small town — previously overlooked by tourists — call attention to their community’s attractions and businesses?


The town of less than 3,000 people 135 miles east of St. Louis off of Interstate 70 constructed the landmarks, each to be the largest of its kind, according to the Guinness World Records book. They plan to build more massive attractions.


During a fateful stop at an Illinois tourist information center on I-70, a guide encouraged us to stop in Casey to view some of the unusually huge objects. To pique our interest, she told us the tale of the giant rocking chair.


Fanning, Mo., originally laid claim to the largest rocking chair in the world. Jim Bolin, vice president of the family-run Bolin Enterprise Inc. in Casey, spent three years working with a crew to win the title.


They used old telephone poles as the basis for the chair and eventually to build not only the world’s largest rocking chair, but it also is considered the largest chair in all of America at a towering 56½ feet. Fanning workers painted the chair red, making it the largest red chair in the world.


Despite their towering size, it was actually pretty difficult to find all eight of Casey’s wonders. We found the largest mailbox in the world off main street, its giant maw waiting for a big delivery from the post office, although a bit too high off the ground to actually receive a package. A giant birdcage was across the street, though the cage wasn’t large enough to set a world record. 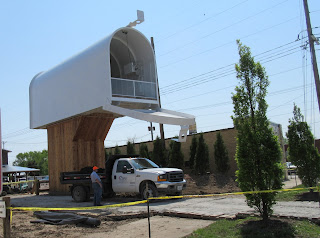 
Being new to town, it took a bit of time to find the 55-foot wind chimes that weigh 8½ tons. They were hiding in a small park that in turn was in front of a workshop where the items are made.


The young man working there said his boss, the aforementioned Bolin, thought Casey could improve its economy by attracting visitors off the highway to see various world record-holders. He recognized that quite a few towns have one item that is the world’s largest, noting the attraction became an icon for those communities.  Bolin started to think that Casey didn’t have an icon. Instead, he thought an abundance of items listed in the Guinness World Records book might put the town “back on the map.”


With help from his family, co-workers and volunteers, they created eight big winners and a number of smaller objects. Visitors have been a draw to Casey, and Bolin continues to think up new creations.


Inside the shop, we could see a giant rocking horse. The horse doesn’t hold a world record, but it certainly was large enough that any children strolling through the store would stare in amazement and ask for a ride.


As we searched for the giant wooden Dutch clogs, several groups of teenagers were covering the same territory.


Has it worked? Our informant said the gargantuan creations have led many people to from the highway to view the free attractions. Town officials expect that draw to only increase as more of Bolin’s ideas become reality. 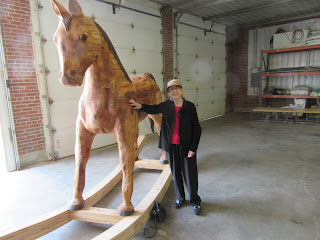