Our Daughter Breaks a Glass Ceiling
We always have enjoyed traveling to visit family. Our latest trip to beautiful Charlotte, N.C., to see our daughter, Debra Anderson, was outstanding.
On July 27, we basked in the admiration of thousands of people as Debra was elected the quartermaster general of the Veterans of Foreign Wars. She is the first woman to break that particular glass ceiling.
The VFW is a not-for-profit veterans service organization with 1.3 million members. The quartermaster general serves as the chief financial officer and is responsible for a variety of functions, including information technology and asset management.
“I am thrilled that this position gives me an opportunity to use my diverse skills developed over many years while serving a great organization and our country’s veterans,” Debra said.
As parents, we were impressed with the number of activities Debra participated in during her time at Rock Bridge High School. We were even more impressed when at dinner one night she announced she was to be the valedictorian of the school’s first graduating class.
She attended the University of Missouri, joining the ROTC and in her senior year becoming cadet battalion commander.
She graduated cum laude and earned the George Marshall award.
She served as an Army officer at a time when leadership opportunities were opening for women. She was commander of an equipment repair company in Nuremberg, Germany, and inspector general at Fort McPherson, Ga.
Her combat experience came in Desert Storm, and she received a bronze star for her work as a division strength management officer in the 1st Infantry Division. She also received two meritorious service medals, four Army commendation medals and various other honors.
She left the Army as a major and for years held various management and administrative jobs in private industry.
Her husband, Steve Bourque, took a teaching job at Fort Leavenworth’s Command and General Staff College, bringing the family to Kansas City. She took a job at the VFW National Headquarters, quickly moving up the ranks and gaining recognition for her innovative ideas on improving the VFW’s effect on the lives of veterans.
Charlotte was a beautiful city for a convention. Like Kansas City, it has many fountains and statues with the addition of half dozen quality art museums. Fine hotels and restaurants line the streets around the city’s convention center.
While we were there, several thousand veterans crowded the elevators and lobbies, most from the Vietnam War. We were impressed that they all knew our daughter and some even recognized us as her parents based on our name tags.
Debra had the opportunity to get her picture taken with presidential candidates Donald Trump and Hillary Clinton, who spoke at the convention on separate days. Those pictures will join the photo of her with President Barack Obama on our dining room wall.
During her installation, her nephew, Sean Anderson Harper, a marine lieutenant, and her husband, Steve, were both part of the presentation. Her acceptance speech that emphasized the future of the VFW received a standing ovation.
My two older sisters and my aunts were all talented women born at a time when few doors were open for women to develop that potential. We have been so pleased to see all four of our daughters achieve their goals in life. 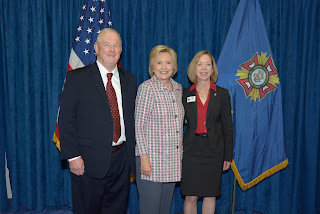 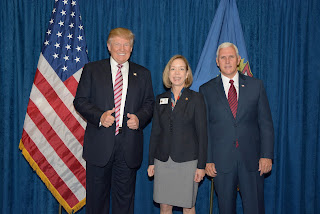