The enslaved Henry “Box” Brown in 1849 escaped from Virginia by being nailed into a box with a bladder of water, and then mailed to Philadelphia where abolitionists picked him up.


We learned about this on visits to several former Underground Railroad sites. But we never had heard the amazing life Brown lived after his escape and how he became a major entertainer in England.


Jeffrey Ruggles, a historian and photographer who wrote “The Unboxing of Henry Brown” (2003), was a lecturer at the Road Scholar Chautauqua program we recently attended in Staunton, Va.


From the age of 15, Brown worked for a tobacco company, the major crop in Virginia. He saved some money from his small salary to make his escape. His wife and three children belonged to another slave owner who decided to sell them.


This major turning point for Brown, 33 at the time, motivated him to work with James Smith, a free black dentist and shopkeeper, and Samuel Smith, a white local shoemaker, to arrange the mailing of the box. The box was 3 feet long, 2 feet wide, and 2½ feet deep. At times, it was not right side up as labeled as it was shipped by wagon, steamboat, rail, and ferry for 26 hours. After getting out of the box, he sang a song based on Psalm 40 demonstrating a powerful voice.


Unfortunately his arrival in the box hit the newspapers, which ended this means of escape for others. Once in Philadelphia his innate genius became apparent. He designed a stage show with James Smith, consisting of a moving panorama of large murals that showed what slavery was really like. This was a great success, but the federal law changed, and escaped slaves could be captured and returned to their owners. Brown’s solution was to flee to Liverpool, England, in 1851.


Ruggles went to England and managed to track down newspaper accounts of Brown’s performances across the country. At the time of his research, Ruggles had to find and read the original records, with no short cuts. He said that today you easily could find a hundred more stories about Brown because newspaper records are computerized.


Ruggles continued the story of Brown’s success. The first 10 years Brown toured with his antislavery panorama, the Mirror of Slavery, doing several hundred shows a year. Then he performed as a magician and still later as a mesmerist (hypnotist). In England, he was known as Professor H. Box Brown and The African Prince. While there, Brown married a Cornish woman, and she and one of his daughters became part of the act. In 1875 he returned to the U.S. with a family magic act. Brown died in Toronto, Canada in 1897.


What struck us as so remarkable was, that with no formal education and so few resources, Brown was able to develop performances that attracted large audiences. He might have spoken about slavery to more people than anyone else living during that time.


A number of books and plays written about Brown, including two by Brown himself, and a metal reproduction of his escape box is part of a monument to him on the Canal Walk in downtown Richmond.

Photos used with permission from Answers in Genesis
The ark from the Ark Encounter is 510 feet long, 51 feet high and 85 feet wide.
prev
next
Top of Form
Bottom of Form
Prepare to be astounded if you visit Noah’s Ark in the Ark Encounter park, which opened July 7 near Williamstown, Ky. The ark was built based on the flood narrated in Genesis in the Bible.
We had a great time and had reservations about only one exhibit, which we will mention later.
The parking lot was a mile or so away from the ark, but we could clearly see this magnificent structure that is 510 feet long, 51 feet high and 85 feet wide. It is seven stories high, including three decks of exhibits, and is the world’s largest timber-frame structure.
We arrived at noon to see hundreds of cars already parked and busloads of visitors being carried from the visitor’s center to the ark and its surroundings, which include a petting zoo, a large restaurant and an Ararat Ridge Zoo with yaks, kangaroos and ostriches. We stopped at the restaurant and found it filled with what we at first thought were stuffed animals. Where in the world had they found so many?
On the ark, the guide said the animals in cages were like what Noah carried on the voyage. We again were impressed with how realistic they were. Was it possible they were based on skeletons of real bears, for example? We learned they were created by artists who made the animal forms by using digital 3-D computer programs. Once the bodies were created on screen, they could be printed using foam in a 3-D printer.
Adding the final fur, scales or skin was a longer process. In a film, the artists stressed that the animals’ covering was the real problem, and they put the hair or fur on one hair at a time. The reproductions were realistic.
We were, however, a little put off by the presence of dinosaurs in several of the cages.
To add a sense of validity, food and water supplies surrounded us in some parts of the ark.
At the beginning of our tour, we saw a diorama of the family: Noah, his wife, three sons and three daughters-in-law in prayer. Dioramas were on every floor. The reproductions of the family members were so realistic that we almost expected them to be able to speak to us. In fact, in one of the settings a recording of Noah talks about his tasks on the ark. 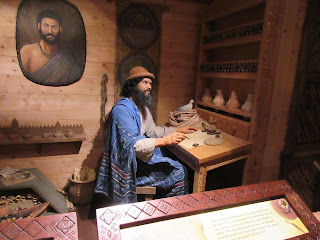 Noah explains the purpose of the Ark
Living quarters on Deck 3 were magnificent. The guide explained that because family members worked hard feeding, watering and cleaning up after the animals, they deserved a place to relax and needed good nourishment to keep up the hectic pace.
The life-size scene where Noah climbs a ladder to put a dove into the air to find land, as his wife looks on, nearly took our breath away.
How could Noah and his family have done all of this? One section on the second floor shows all of Noah’s skills working with wood and metals. Again, life-size dioramas told the story.
At home, Wayne had seen a YouTube feature that showed this ark being constructed, with use of major hoists, cranes, modern tools and 1,000 craftsmen. When we asked one of the docents how Noah could have accomplished something this size, we were told Noah was 480 years old when God told him to build an ark. He was 600 years old when the flood came, so during that 120-year period he built the ark. The docent added that Noah’s children were not born until his 500th year.
Ark Encounter is operated by a group called Answers in Genesis, which also runs the Creation Museum 45 miles away in Petersburg, Ky.
We suspect most of the visitors believed that the world was created 6,000 years ago and that, for them, this was a realistic presentation of what happened.
Visitors do not need to be believers in this particular interpretation of creation to appreciate what has been accomplished here.
Fundraising for the project was helped by a debate in 2014 between Ken Ham and TV personality Bill Nye, the Science Guy. Ham, who also founded Answers in Genesis, does try to answer all of the questions raised by evolutionists and scientists who believe otherwise.
An exhibit is given over to Ham disputing scientist Nye about evidence for multiple ice ages based on drillings in Greenland.
Ham counters Nye’s evidence with a reinterpretation of what is being discovered.
In another source we found Nye’s response to Ham: “It’s all very troubling. You have hundreds of school kids here who already have been indoctrinated and who have been brainwashed. This is about the absolutely wrong idea that the Earth is 6,000 years old that’s alarming to me.”
Depending on your beliefs, prepare to enjoy the particular exhibit or skip it and enjoy the rest of the exhibits as an interesting story from the past.
Considerable thought has gone into the creation of this attraction, including some court battles. Although it probably will not change anyone’s basic beliefs, it is a presentation of the other side of the story. 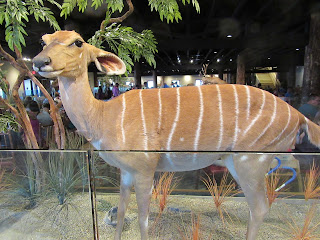 Life Sized Animals on the Ark were made on a 3D Printer
Posted by Wayne Anderson at 4:06 PM 3 comments: