Bottom of
The Kentucky Science Center in Louisville, Ky., might be geared more toward children and teens, but adults also can find fun in the innovative presentations.

We only paused briefly at the first-floor exhibit “Science in Play,” where younger children and families were puzzling rather successfully with strange equipment and interactive activities.


The second floor featured an area where Wayne designed a bicycle for an imaginary company looking for a more marketable design. He combined several materials and features on a screen, aided by the screen guide, which then told him it was a moderately innovative design that could be put on the market. 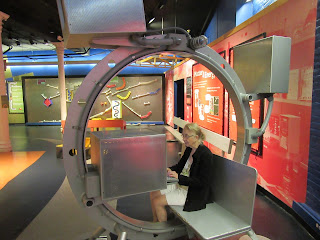 Taking the opportunity to create a new design for a bicycle


Another interactive area allowed you to play with differently shaped plastic and wood pieces, stacking them into a tower on a platform. Pushing buttons, the structure is subjected to different levels of earthquake-like shaking. The goal was to build the tallest tower possible that could withstand a 10-second shaking, which we accomplished.


We next entered a booth meant to simulate a space capsule where a woman on the screen offered us a chance to go into space and study the effect pollutants have on the hole in the ozone layer. With a fire button on a joystick, we “flew” ourselves into space over Antarctica, where we could view the existing hole.


When the guide showed it to us as it had been 20 years ago, we got the message we might be in serious trouble, so, of course, we headed back to earth immediately to do something about it.


At a “body watch,” a cluster of life-size mannequins with TV sets in their stomachs allowed us to see what happens in the body under various conditions, including seeing a fetus in the womb, food being digested and the cause of hiccups.


In another room, the screen guide, which was proud of the Egyptian mummy and sarcophagus on display, gave an educational presentation on how it was found, almost destroyed by a heavy object falling on it and how it ended up in the museum.


The center also features a chemistry kitchen, which is geared to children, for a show on electricity and ways of creating electrical effects.


An overhead line featured 23 products made in Kentucky and visitors tried to name them with the answers eventually appearing on a board.


The third floor has a large space devoted to “The World Within Us,” a series of displays about how our bodies work, including an especially vivid section on reproduction. We were surprised, given the number of children we encountered, how few were studying the human body that day. It would be difficult and expensive for individual schools to have anything close to what science museums have available to explain these concepts to children, making it all the more advantageous that so many cities have made these facilities available.


The interactive displays received much attention from young people but large posters simply providing information about different aspects of science were often passed by, seeming to stress the importance of hands-on learning for children.


The center also has an IMAX theater where five movies were being shown.


We are fortunate to have two outstanding science museums in Missouri. The St. Louis Science Museum has been ranked No. 5 on the Parents Magazine top 10 list, and Kansas City Union Station has made their “best of the rest” list. 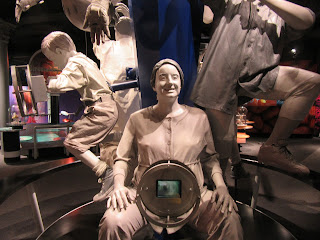 A display at the Kentucky Science Center in Louisville, Ky., shows a fetus developing in the womb.


The Museum of East Tennessee History in Knoxville describes life in three centuries in a 35-county region that has had a marked influence in the development of our nation.


The main exhibit, "Voices of the Land: The People of East Tennessee," provides an overview of stories in the words of the people who have lived there throughout the area's history.


The following exhibits with stories and artifacts focus on specific historical periods starting with "The Land Beckons," the struggles between the Cherokees and the immigrants settling in their land.


In "A Land Divided" we learned that, like Missouri, both sides in the Civil War were represented with east Tennessee being mostly for the Union.  Blacks in East Tennessee were more likely to be skilled artisans rather than field slaves, making the area easier to integrate.


The Tennessee Valley Authority introduced electricity to the area with electric lights, and modern home appliances making life easier.  One display shows the changes that took place in how we run our homes by showing what was used pre TVA and what was used after.  A modern electric iron is sure an improvement over a flat iron heated on the wood stove. 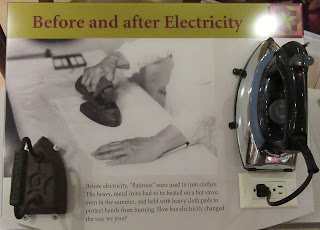 Some major historical events occurred here, probably the most important was turning the surrounding area into Oak Ridge, a "secret city," where atomic material was processed for the first atomic bombs.


Not only the community but the workers did not know exactly what they working on.  "We train you to do what is needed, but we cannot tell you what you are doing.  I can only tell you that if our enemies beat us to it, God have mercy upon us."  This is a quote in the section that discusses how the Oak Ridge area became a secret.


The museum takes five main approaches to capturing our attention and informing us about what has happened here.


1.  The visitor at some displays can pick up a listening device and hear a re-enactor reading a letter, a diary, or a written report, sometimes short, sometimes long.  The longest was of the Clinton Twelve, a group of black students who integrated a high school in the area.  Some of the letters and reports from the Civil War, on the other hand, were quite short.


2. On multiple choice screens the visitor can chose to view from six people's stories of a particular event along with accompanying pictures.  For example, in the Civil War section visitors are offered: For or against secession: six views.


3. Movies and TV are used to take us back to the past.  At the entrance we viewed a movie about the area with background voices reading comments from people who had lived here in the past.  The most complete of this kind of presentation were the films of the development of the music of the area that led to the growth of the music industry in Tennessee leading to the development of Nashville as the center for country music.


4. At many of the exhibits there are materials on posters that was written by people of the different periods along with old pictures to give a feel of what life was like.


5.  Finally well chosen objects are on display to bring the visitor an even better feel for what life was like during a particular period. Among the objects are Davy Crockett's rifle, a real log cabin, a pioneer road wagon, a well stocked corner drugstore and Dolly Parton's red dress.


The multiplicity of methods used to present the history of East Tennessee makes this an especially valuable asset for enhancing the classroom experiences of schools in the area. 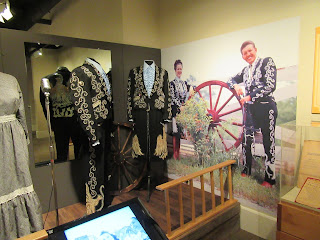 Country Music got its start in East Tennessee 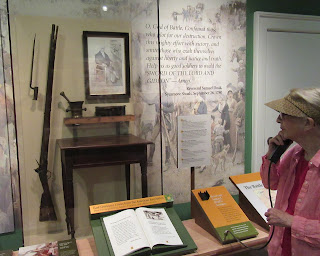