THE JOYS, BENEFITS & SURPRISES OF TRAVELING WITH CHILDREN


In the holiday season we asked our four daughters what memories they recall about the benefits, fun,  struggles and surprises about traveling with us until they finished  high school.


They all stressed how much they learned about how people in various parts of our country and the rest of the world lived and had different  customs.


Jerilyn, our oldest daughter, especially enjoyed the year we lived three months each in four countries where she heard many stories in the museu
ms-- not just focusing on historical facts.   She did feel that "visits to any more cathedrals were more than a bit  too much"---so we listened and adapted.


We were still in the days then of flat tires, running out of gas and emergency bathroom stops, sometimes in the nearest woods.  When Debra, daughter No. 2,  heard a long ago friend say, "If you don't like inconvenience, don't travel," she laughed and said that "traveling was a challenge that helped me improve my  problem solving skills.  I certainly learned how to use a map in planning trips--long before GPSs became available ."


When Rosalyn, born exactly six years later than Debra, said that "Traveling broadened my mind about the differences in how other people lived.  I mostly had a great time, but I did have some concerns."  When she went to the third grade for three months in a small town in England, she missed a few recess times because she refused to eat the liver and cabbage offered.  She was also concerned that "I may lose my best friend if I am gone a year!"


When her sister Stephanie was in the first grade there, she was a little surprised to be called a Yankee. A rule that surprised her was that girls had to wear skirts, not slacks, unless the weather was bitter cold, but she coped rather easily.


When we were taking a long walk in the woods, she sat down in the middle of the path and said,  "I'm really getting tired of getting toughened in."  She came back to the U.S. with the cutest English accent.


Both sisters enjoyed being surrounded by students-- a nice break from being home schooled as they lived in four countries in that year learning about Europe.


Traveling with children gives them an opportunity to see and do things in the world in a way present digital equipment does not allow.  They may hold all the knowledge in the world in the palm of their hand, and be connected instantly with all of their friends but that kind of lifestyle does not include  the reality of skiing down a mountain, canoeing on a lake or cooking a meal over an open fire.


We discovered the joys of traveling with children with our first two daughters when we lived in Maryland on Chesapeake Bay.  In our free time we explored the east coast camping in a tent, cooking our food on a gas burner and bonding us as a family.


When we returned to Columbia in 1963, we shortly  added two more daughters and decided to add a travel trailer.  We started exploring the west: Petrified Forest, Grand Canyon and  Colorado with its ghost towns and skiing sites.


Wayne was able to take sabbaticals for a year each in 1972-73 and 1978-79 and several summers to teach for the U.S. Air Force in Europe-- eight different villages in five different countries.


We took folk marches with the natives in Germany and Italy and had them as next door neighbors.   In Italy we only had our two youngest daughters with us who were then 12 and 10.   Italy was their favorite country, because of the food, the friendly people and its multiple attractions especially Rome, Venice and Florence. Jerilyn and Debra were able to join us to see some of the Italian sites.


During this time we were also still traveling to visit family around the country and attending family reunions--one with our relatives in Sweden.


We continue our travels with family members.  Rosalyn's children took a Road Scholar week with us in Northern Minnesota where we took the ropes course, canoed and learned how to navigate with a compass in the woods.  Stephanie's twin daughters have traveled with us frequently to Tennessee sites.


We are looking forward to continuing traveling as long as we can and having a Merry Christmas with our extended family. 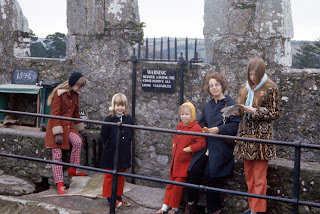 In Cork, Ireland we all had a chance to kiss the Blarney Stone, which gives you a special power with words. 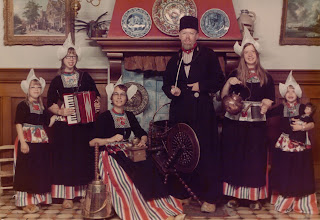 In Holland we pretend to be an old fashioned Dutch family 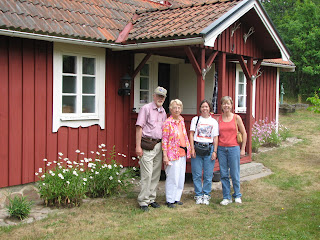 With two of our daughters at the home my father was born in, in Sweden 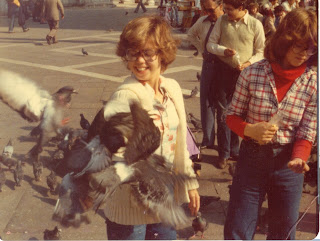 Feeding the birds in Venice in St. Marks Square 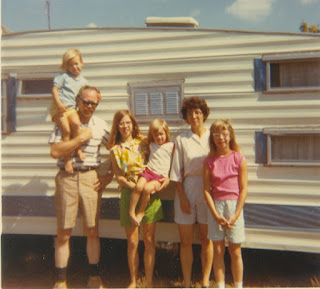 In the early days we traveled by trailer
Posted by Wayne Anderson at 11:23 AM 4 comments: 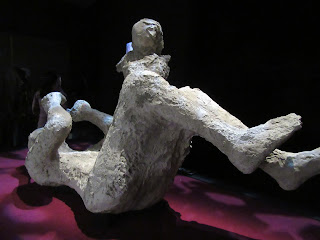 
As part of the exhibit, several casts are shown of people and animals in the last positions they held when Mount Vesuvius erupted Aug. 24, 79 A.D. Here, the cast of a man with a child in his arms is displayed.


One of the most magical happenings in this world is that nature both can destroy a piece of land dramatically and preserve it in some way that astonishes us later.


It was this feat that fascinated us as we explored “POMPEII: The Exhibition,” which will run through spring at Union Station in Kansas City.


Even before entering, we were given a taste of what to expect. The hallway walls toward the entrance featured reproductions of paintings and frescos that once adorned walls of the Pompeii Romans, a level of art sophistication not to be achieved again for centuries.


In the waiting area, a short film showed the comfortable lifestyle of richer citizens and their complete lack of foresight what was to happen to their city and its 11,000 people on Aug. 24, 79 A.D, when Mount Vesuvius erupted.


The exhibit doors opened and we were introduced to first-century Roman Empire life. The exhibit’s first three quarters details Roman citizens’ lives — made more comfortable by the large number of slaves taken captive as Rome conquered Europe and Africa. Slaves earned their freedom by selling their services as cooks, doctors and gladiators.


The area’s soil was richer than in the rest of Italy, enabling a steady diet of fruits, vegetables, fish and other seafood.


One poster on display shared a recipe that used a favorite seasoning of Pompeii citizens, garum. Made from fermented crushed tuna and the intestines of moray eels in salt, the seasoning was enjoyed throughout the Roman Empire.


Artifacts loaned from the Naples National Archaeological Museum in Italy illustrated the Pompeii artisans’ sophistication. Original weapons, lamps, jugs, furniture, medical instruments and tools used in their everyday life were shown. The fine work on the clay and metal lamps, and an accompanying audio tour also detailed the items and lifestyle of Pompeii citizens. 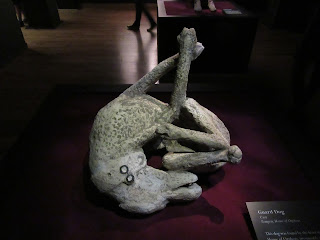 As part of the exhibit, several casts are shown of people and animals in the last positions they held when Mount Vesuvius erupted Aug. 24, 79 A.D. Here, the cast of a dog is displayed as he defends the doorway to a house.


Romans flaunted their wealth with elegant frescos on walls, mosaics covering floors and comfortable dining areas with sofas. They had a rule that dinner was always taken in groups of at least three and never more than nine, a tradition modeled after their relationships with their many gods.


A wall-sized film showed drone footage of Pompeii, giving us a good idea of the size and condition of the present site that had been forgotten soon after the destruction. It was only 250 years ago that the site became a tourist destination.


Another film showed how Mount Vesuvius erupted — the 24 hours of destruction began with earth shaking and rumbling, followed by spilling ash. Later, lava and more ash flowed, followed by rocks, gas and smoke. The finale was a dead city buried under 13 to 20 feet of volcanic ash and pumice, burying the site for 1,500 years.


We walked into the room of the remains, where casts have captured the last moments of several Pompeii citizens and animals. The eruption happened so fast that people were captured while moving, creating long-lasting images of their final movements on Earth.


When experts excavated the site, they used plaster to fill the voids in the ash layers that held the bodies in the positions they were in when they died. We saw a man on his back holding up a child, another sitting and covering his face with his hands, and a dog curled as if ready to defend the door he was guarding.


The section also covered the gladiators of Pompeii, who seemed to function under less deadly rules of combat than those in Rome. There were fewer battles to the death and, if a gladiator was good enough, at some point he could buy his freedom.


Other rooms introduced us to some of the secrets of the city, including prostitution, both legal and widespread. Many men preferred prostitutes since they often married for financial reasons, family connections and to have children. The prostitutes largely were slaves, and pornography was common.


Watching nature destroy an entire city saddened us but learning the lifestyle of the ancient citizens was extremely interesting.


In 1979, when our family was stationed in Italy with the U.S. Air Force, we visited Pompeii and Wayne was allowed, for a small fee, into a room where scenes of intercourse filled the walls.


Our guide said all women, including Carla and her sister, were considered too sensitive to see such scenes.


On the door of the Union Station gallery a warning was placed, telling families about what they were about to see and suggesting children should not be allowed in. Carla laughed that now women were allowed — another glass-ceiling broken.


We enjoyed the “frozen in time” exhibits at both Union Station and in Pompeii, where 2.6 million people visit every year to see one of Italy’s main attractions. 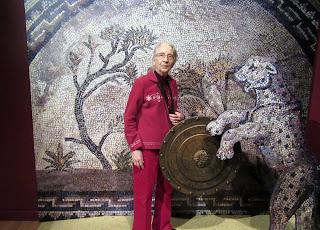 Carla Anderson stands in front of a mosaic from Pompeii 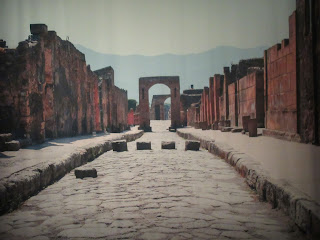