Grand Caverns of the Shenandoah Valley

GRAND CAVERNS OF THE SHENANDOAH VALLEY 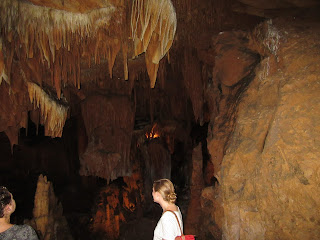 Inside the Grand Caverns


After examining eight brochures advertising caves in the Shenandoah Valley, I chose to tour the oldest show cave, the Grand Caverns, which is noted to have had guided tours led for more than 200 years.  One of the early visitors was Thomas Jefferson.


The Grand  Caverns, near Staunton, Virginia, were rated by Parade magazine as the number two cave attraction in our country.


The caverns was discovered in 1804 by a Bernard Weyers, and he opened it to tourists two years later making this the oldest operating show cave in the U.S.  It was declared a National Landmark in 1973.


The caverns with 56 degree yearly temperature is  the perfect place to visit any time of the year.  It would cool you on a hot day and warm you up on a cold winter day.


I came in on very hot day in a tee shirt but after walking a short distance in the cave,  I found a sweatshirt I was carrying felt good.   Mostly there were large rooms and high ceilings, but a few low ceilings, one on which I bumped by head.  On some tight places our group of 20 needed to walk single file, and some of the heavy among us just squeezed through.


In places water dripped slowly from the roof creating over ages of time the stalactites and stalagmites. The most beautiful spot was created with the use of colored lights in the Rainbow Room that gave us a sense of seeing a beautiful city lit up at night. 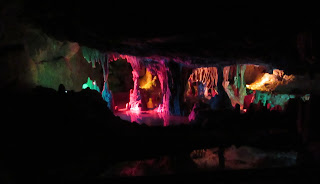 The Rainbow Room of the Grand Caverns in Virginia


In one of the large rooms dances had been held in the early days, and the rule according to the guide was that each man was to bring two women with him.  A stalagmite in the middle of the room was used by a woman when she wanted to dance by standing by it and passing her hand over it.


The rocks in the cavern are constantly growing and we were warned not to touch anything because a single touch could possibly stop the growth process.  Regular tours were run on the hour, and our group of 20 passed the group before us coming out, but suddenly we found ourselves being passed by a large group of  children who were having a separate tour.


Near the exit our guide pointed out over 200 signatures of both Union and Confederate soldiers who had been in battles here during the Civil War.  We were warned not to touch since they are so fragile. 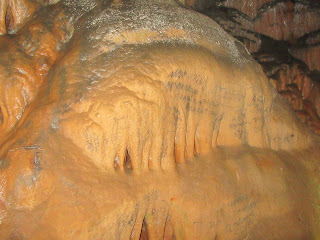 Signatures of Union and Confederate soldiers from the Civil War


You can’t take a cave tour without your guide turning out all of the lights so we can experience complete darkness, a rarity.  The last cave we had visited the darkness wasn’t complete because of cell phones and watches.


Here we experienced complete blackness along with a story of how early visitors using candles had hit a mystic area where the candles went out and they had to find their way out in complete blackness, a difficult task given the various byways.


Grand Caverns offers a breathtaking panorama of subterranean beauty! on various physical aspects, such as room size, paths, ratio of growing formations to dormant formations as well as overall beauty.


In addition the waiting area has a variety of educational displays that added to what our guide had told us.  There I learned more about bats, cave creatures, how limestone forms caves and the early uses of caves by humans.

Posted by Wayne Anderson at 2:15 PM No comments: