My first psychiatric hospital experience was as an intern at Nebraska Psychiatric Institute in 1954.  This was before drugs were used to control psychiatric  symptoms of mental illnesses and a variety of what are now labeled primitive methods of treatment were in use.


So recently at the Glore Psychiatric Museum in St Joseph, MO., I took a step back in time to those days and beyond to the truly dark ages of mental health treatment .


The museum is on four floors of what once was the Lunatic Asylum #2 that housed 3000 patients.  In 1954 we relied on treatment methods that were of little help, but gave us some feeling  that some patients were improving.


Electric shock was being used for a variety of conditions such as depression, schizophrenia, homosexuality, and hysteria. When I watched a patient I was counseling on the table in convulsions my visual field narrowed and I almost passed out. 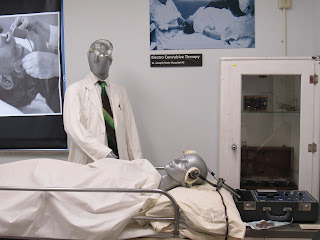 Electric Shock was used for most every mental illness


It has been found that the electric shock does work on some problems including certain kinds of depression, but it has been dropped for most other mental health conditions.  Since 1973 homosexuality has no longer been considered a mental illness.


Also familiar to me from my time at Nebraska was the patient (manikin) in a tub of ice water that was used as a calming technique. 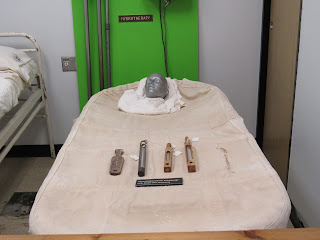 Ice baths were also used for treatment of mental illness


One section of the museum is given over to lobotomies that were still being used in the 1950s. Dr. Egas Moniz won a Noble Prize in 1949 for developing the procedure.  Later as a VA psychologist I worked with victims of this method of treatment that separated by surgery the frontal lobes--one's judgment center --from the rest of the brain.  The cases I worked with had lost the ability to be rehabilitated for life outside the hospital.


From those 1950s methods the museum went back even further to more  primitive ways of dealing with the mentally ill: steel crates to hold violent patients, isolation in chains to calm them, wheels like the ones rats run on to teach them to be still.


Even further back it was dangerous to be mentally ill because you could be declared a witch or a cohort of the devil and be burned at the stake.  A manikin stands ready for execution, strapped to a pole with the firewood stacked at her feet. 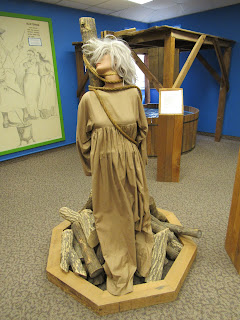 Some mentally ill people were burned at the stake as witches


The basement of the museum took us into another dimension of running a mental hospital: food.   The hospital had had gardens and animal barns to provide some of the tremendous amount of food consumer by 3000 patients.  The cooking area had tubs in which hundreds of pounds of potatoes could be cooked at one time.


Patients not only grew much of the food and helped with the cooking but other money making projects helped keep hem active.  Daily walks were also a part of the treatment.


In the 1950s there were complaints about patients being required to work and complaints about this policy that was cutting into local businesses--so that treatment was dropped.  When I worked in a VA hospital after this kind of work was forbidden, I found some patients who had grounds' privileges were sneaking off into the woods to cultivate patches of vegetables.


Cutting out patient labor made hospitals more expensive and with the widespread use of drugs for treatment, it was felt many of the patients could be discharged.


This had a number of consequences, one being an increase of crime and the sending of many mentally ill to prison.  It is shown at this hospital by the section that is now a Missouri prison with 250 prisoners.


My own experience with prisoners is that many of them should be receiving mental health treatment. My observations were agreed to by prisoners I have worked with who resent the mentally ill among them because they are so unpredictable.


The Glore Museum is an eye-opening experience.   Visitors also have the opportunity to see three other small museums connected to the Glore which I will write about next week.


At the  Cosmosphere International Space Museum in Hutchison, Kansas, my wife Carla and I continued to be amazed that a town of only 42,000 people had been able to develop one of the top world's space  museums, a major destination for education about space exploration.


The museum started small when a local woman, Patricia Brooks Carey, bought a used star projector and opened a small planetarium in 1962.   In 1966 Dr. Robert H. Goddard's lab was added, Goddard being one of the first scientists to test rockets beginning in 1926.


By now the museum has the largest combined collection of U.S. and Russian space artifacts in the world.  It was easy to lose ourselves in the 105,000 square-feet of rockets, space capsules, astronaut suits and stories of creative and far-seeing personalities.


One of the planetarium's consultants was serving on a committee at the Smithsonian that was trying to find homes for thousands of space artifacts that had been released at the end of the Apollo program.  Adding artifacts from this collection led to the opening of the Kansas Cosmosphere and Discovery Center in 1980.  The museum continued to seek out and add artifacts and in 1997 a new venue was opened three times the size of the previous one. 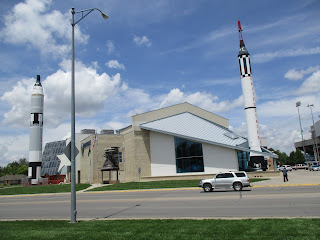 
Here is a quick overview.  As we approached the building, we saw two rockets standing at the corners. One was a Mercury-Redstone Launch Vehicle and the other a Titan II rocket used in the Gemini program.  The Titan was placed in the original rocket pit that had been used at the Kennedy Space Center in Florida.


In the lobby was a Lockheed Blackbird overhead, the world's fastest spy plane at 2,200 miles-per-hour at 85,000 feet.  It had a black titanium surface that reached 600 degrees Fahrenheit--this one had flown many missions.


The Germans had done much to develop rocketry in their V-1 and V-2 missile rockets which led the way to space exploration. A display told the story of how Wernher von Braun helped develop the two rockets and at the end of war how he took his team of scientists to the U.S. army rather be captured by the Russians. 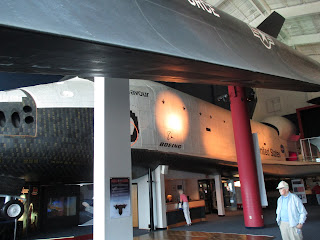 A space shuttle stands in the lobby


Despite the U.S. having von Braun, the Russians were ahead of us in the space race. A  section is devoted  to the Soviet Vostok Capsule--the U.S. was given a few capsules. The first man to use it to go into space was the Russian Yuri Gagarin.


The Apollo 13 had become famous after the narrow escape from death of its astronauts on a failed mission. The original Apollo 13 has been reconditioned after a massive search for its 80,000 components that had been spread across the world   The capsule itself had been taken back from a museum in Paris, France, after much political maneuvering.


We took in the three presentations that were available.  At the Digital Dome theater was "Dream Big: engineering our world," a 3D movie that told how engineers are making a better world including creating more space for humans by building earthquake-proof high rise buildings. We watched the Night Sky Live at the planetarium,


We were  especially delighted at the live presentation in the Dr. Goddard's Lab by a young scientist who demonstrated  with energy, various forms of propulsion  used in rockets.  We were also impressed with the sophisticated questions asked by two ten-year -old girls sitting behind us. They were obviously very interested in science.


We have visited the National Air and Space Museum, Washington, D.C., Kennedy Space Center, Florida, and the  U.S Space and Rocket Center, Huntsville, Alabama.  We found them all outstanding, but this nearby museum in a small town was a match in terms of the artifacts available for examination. 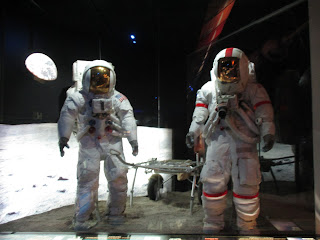 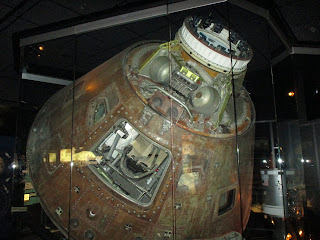 
Posted by Wayne Anderson at 8:27 PM No comments: