The Jurassic World: The Exhibition, until January 2018, at the Field Museum of Natural History in Chicago, is an unusual traveling exhibit based on the movie Jurassic World.  The exhibit includes a blend of some realistic dinosaurs, some active entertainment, and some science fiction. Although my wife Carla and I basically enjoyed most of the exhibition, we were a few times confused about what was questionably science at this time by most scientists.


A special 17,000 square foot plastic-walled perma-tent has been erected on the museum's front lawn for the exhibition, which has been so popular that visitors need timed entree tickets.  Even with these limits we found the exhibition overcrowded making it difficult to hear the guide  giving a tour of the fictional  Isla Nublar on TV screens.


Not knowing what to expect each new area was a surprise.  When we entered a jungle like environment , we soon encountered a Stegosaurus and a Brontosaurus, who moved their heads, their eyes followed us and they were close to us.


Next we entered a room that gave us "scientific" background how these were genetically created by taking dinosaur DNA from mosquitoes who had bitten them and then become incased in amber. To reassure us of the reality of this "scientific" approach a full wall of brightly lit amber is on display. This mix of fictional science from the movie and real science presented elsewhere in the exhibition may be bit confusing to some visitiors.


A case has three baby dinosaurs who have just broken out of their eggs and on the walls are displays explaining to visitors the "science" involved in their re-creation.


The exhibition took on more reality as we entered the next space.  A barrier stood before us and we were asked to wait a moment because a carnivorous velociraptor had been seen in the area. 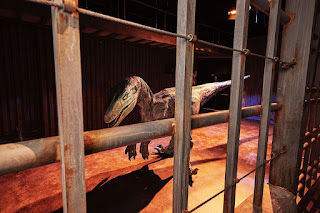 A carnivorous velociraptor attacked walls of his cage.


And sure enough a moment later he came roaring around the corner full of noise and what looked like rage.  He bit at the barrier and hit his head against it trying to break it down.  We were all impressed but the kids in the group found him especially enchanting.


However, mostly we were also being exposed to real science and could touch screens to learn more about the movie it was based on and others to give us real scientific information as it was known when the film was made.


That is, these dinosaurs were covered in scales and had a certain coloring.   The recent information we have on the subject suggests that rather than scales they may have been covered in feathers like their descendants the birds.


Our biggest thrill was yet to come.  We entered a fair-sized room that had a fence and a truck like the one used in the movie.  We heard a roar and then saw the head of a T-Rex soon followed by his body.  He also was in a bad mood and upon seeing the truck tried to tip it over.  His head and mouth were so large he could have picked me up in it. 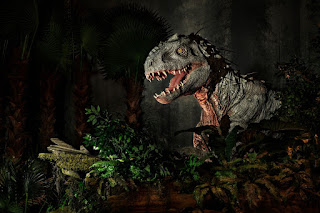 A modified T-Rex was the scariest thing in the exhibition.


Later in the Field Museum in the Stanley Field Hall I found that he was same size as the T-Rex Sue, 40 feet long.  Sue who has 90% of the original dinosaur resides on the first floor and is a major attraction.


In the upper level in Dinosaur Hall the Field Museum has a permanent, expanded collection  including every major group, and the worlds they lived in.


The Jurassic World  exhibition opened last year in Franklin Institute in Philadelphia and has been  at the Melbourne Museum, in Australia. 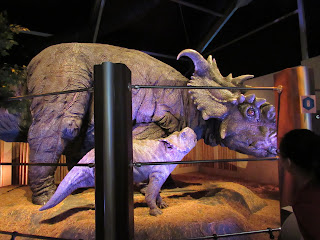 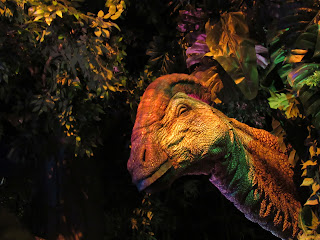 The exhibition is a drop back into the world's very distant past.
Posted by Wayne Anderson at 12:06 PM 3 comments: