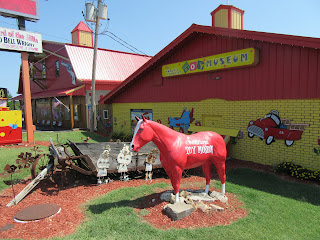 The World's Largest Toy Museum is in Branson, Missouri

When in Branson, MO, last fall I visited The World's Largest Toy Museum with over a million items from the19th century to the present time.  My mind was flooded with memories about my childhood. I remembered the toys I had and the ones I would like to have had if we had had the money.


This is obviously a common response, and parents and grandparents bringing children will see a lot things that will trigger memories that can be shared.


There were toys for every age group.  I could see, however, that some of the kids walking around with an  iPhone in their hands were wondering how anyone could have found some objects interesting enough to spend time with.


My first strong response was to the National BB Gun Collection, with over 500 guns.  I would have loved to have had a grandchild or two with me so I could tell them about the BB gun wars of my childhood. 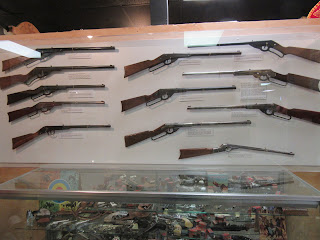 There were 500 BB guns in their collection

I would tell about my dissatisfaction with my Buck Jones pump and my envy of those who had a Red Ryder lever action.  Those were the days of little parental supervision. and I'm not sure my mother and dad knew the hazards the guns created.


In the checker museum I could have bragged about winning the nine-year-old checker championship in Jamestown, N.D.


The Lone Ranger section took me back to lying on the floor in the dark listening to him and his faithful companion Tonto on the radio.


Dolls play a large role in many people's childhood memories, and the museum has a wide range of them.  My wife Carla especially enjoyed the displays. Our daughter Jerilyn has added several hundred of similar ones in her collection at home.


I found a number of special displays. The first group was labeled Vintage Store Front Mechanical Dolls.  Here I saw James Cagney, John Wayne and Jack Kennedy standing with a group of realistic dolls dressed in outfits appropriate to who they were.  They didn't appear to me to be something a child would want, rather something an adult would keep for display.


The second large display had GI Joe boxes in the exhibits, but the figures were dressed and armed German, Russian and other participants in World War II.  Again I didn't see them as children's toys but as collectables for adults interested in fine details of uniforms and weapons.


The owners, Tom and Wendy Beck. started the museum in Texas in 1998 and moved to Branson in 2001with a mission "to build a toy museum that would bring people back to their childhoods, bring forgotten memories back to life, and offer opportunities for sharing those recollections with family and friends."  I feel that they accomplished that goal very well.


As toys have been added, more building has been added and museum now covers three buildings, with 26,000 feet of exhibits.


It is not all toys.  Space has been given to Harold Bell Wright who wrote "Shepherd of the Hills," a novel that sold millions and became a play that was part of the start of Branson as a tourist center.


We watched a movie on Wright's life and saw a copy of the letter written by President Ronald Reagan about the positive influence of Wright's novel on his life.


In the last building we visited there were several large railroad displays, unlike anything I knew about as a child.  Finely detailed buildings, tracks that intersected and trails built on a special scale.  My contact with this sort of thing was as an adult with friends who had turned their basements into train stations fulfilling a childhood dream.


For adults this is a very pleasant drop back into our past and for children to have fun  exploring . 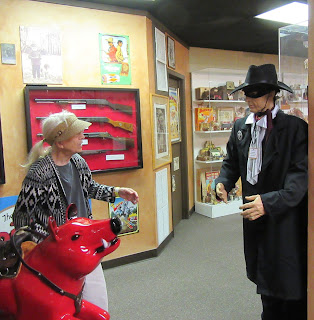 My wife, Carla in startled by a masked manikin 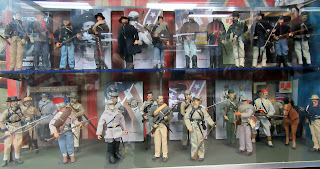 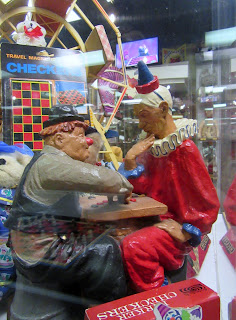 The Museum has a special section on checkers

Posted by Wayne Anderson at 4:50 PM No comments:

Capturing the U-505 German Submarine in World War II


It turned out to be a real adventure when we visited the Museum of Science+Industry in Chicago to explore  the capture of the U-505 German Submarine during World War II.


Would we find a way to stop the devastation the U-Boats were creating on our supply ships crossing the Atlantic?  Would we capture a U-Boat before its crew could blow it up?  What would be find that would help us end the war?


No expense has been spared to provide answers to those and other questions by the use of a remarkable collection of archival film footage, 200 artifacts and interviews and testimony from the survivors, including the German captain of the sub.


We started down a hallway covered with newspaper headlines about the start of the war and the ongoing battles.  Charts indicated the number of merchant ships sunk each year, peaking in 1942 with 1,150 ships sent to the bottom of the Atlantic.  The subs were working in wolf packs. England was on the verge of starvation.  The subs had to be stopped. 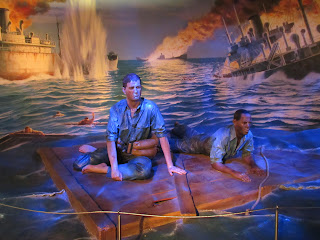 
The Allies had to coordinate their various forces and a central office was developed that took messages from the air, the ground and naval forces.


With antisubmarine intelligence, electronic tracking and attack aircraft we set up our own Hunter-Killer Task Groups.


One of the visuals is a life- sized hologram of six people in a central control center gathering details and putting together an organized approach that led them to a sub off the coast of Africa that destroyers and attack planes surrounded.


The wolf pack hunters had now become the hunted.


Another large display with two ships' officers watching a large screen that shows the film taken at that time of the subs capture.  We see the dropping of a special explosive that will damage but not sink a sub but would bring it to the surface.


It works and later we get to watch the members of the destroyer's crew go aboard the sub to get papers, maps and anything else that will tell us about Germany's war plans.


There is considerable danger because of the 14 timed explosives that should have been set.  Fortunately for the American sailors it had all happened so quickly there was not time to set them to explode. Instead a sea strainer cover had been opened and water was rushing in. The cover was put back on. 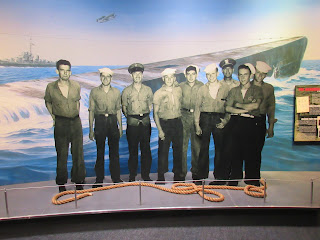 
Sacks of materials were taken off, but most important was the capture of the German M4 enigma coding machine.   This was to be a gift without price, since now the Allies could decode German messages.


To do this we needed to keep secret the capture of U-Boat and lead the Germans to believe it had been sunk and all of the crew killed.


Only one German died, the others were all taken to a secret prison camp in Louisiana.  The boat itself was towed to  Bermuda without being discovered by the Germans.


One display shows how the captured German crew tried to send messages out that they were still alive, but fortunately failed.


At the end of the tour a film showed these sailors meeting with their families who had believed they were dead . Being captured probably kept them from being killed because once the Allied forces got its act together, 70% of the German subs were sunk. 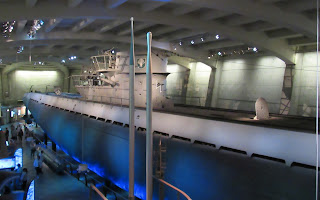 The U-505 has been reconditioned and is in great condition.  Tours can be taken through it.


The U-505 has been reconditioned and looks in marvelous condition.   Tours are available for an extra charge, but so much is going on around the boat that the interior tour is not really necessary.  We had taken the interior tour shortly after the boat was moved to Chicago.


The children visitors were getting a real thrill using the material on exhibition.   Enigma machines were on display along with a screen on which the visitor could code and decode messages.  The living quarters were there to see what the sleeping and eating arrangements were on board.  Periscopes were available to use.


Toward the end of the exhibition a film from 1964 is shown of interviews with the German Captain Harald Lange of the U-Boat and Admiral Dan Gallery who had captured him.   They had become friends in the interim.


So much more can be seen.   If you are interested in World War II, this is a must see for the vast archives and artifacts that have been drawn on to make this excellent exhibition. 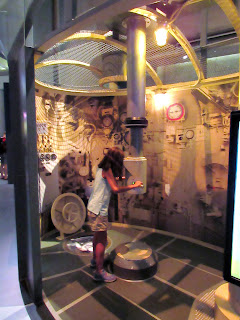 Visitors can operate some of the submarine equipment

Posted by Wayne Anderson at 3:00 PM No comments: