Truman in World War I

HEROES OR CORPSES: TRUMAN IN WORLD WAR I 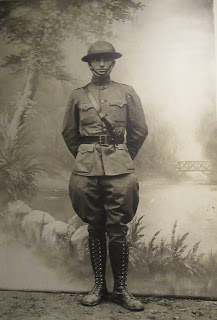 
As his troop ship sailed for Europe in World War I on March 30, 1918, future president Harry S. Truman remembered, "there we were watching New York's skyline diminish and wondering will we be heroes or corpses?"  The patriotic 33-year-old  farmer had volunteered to serve as an artillery man in action in France.


The new exhibition at the Truman Library and Museum in Independence gives a very personal, insider look at what that experience was for Truman with enlarged pictures, reports from the battle zone, personal memorabilia, and probably most important quotes from letters that Truman wrote to his future wife Bess.


In 1905 Truman had joined the Missouri National Guard where he learned the basic skills of an artilleryman in monthly drills and summer encampments.  He had to withdraw in 1911 because of the demands placed on him to support his mother and sister by working full time as a farmer after his father died.  He had tried making a career in oil and mining, but nothing had been profitable.


He was in love with Bess Wallace, daughter of the highest status family in the area.   Her mother was not happy with the possibility of her daughter marrying a farmer with no formal education beyond high school.


He noted, "I was a Galahad after the Grail and I'll never forget how my love cried on my shoulder when I told her I was going.  That was worth a lifetime on this earth."  They planned to be married if he returned.


First he had to get the artillery battery of 200 Irish and German Catholics from Kansas City under control.  They had already proved too difficult for several officers with their stubborn, undisciplined behavior.  His response was "I was rather doubtful of my ability to handle that obstreperous battery."


A critical moment occurred when they were subject to incoming artillery fire, and one of the men shouted, "Run fellows they got a bracket on us."  Truman stood his ground while screaming profanity at the fleeing men to return.   They did.  Their guns and horses got saved, none of his men were killed or injured.  The battle showed the men of Battery D that their small bespectacled captain could hold his ground under challenging conditions.


Later he wrote Bess, "The Central Powers have asked for peace and I was in the drive that did it!  I shot out a German battery, shot up their big observation post and ruined another battery when it was moving down the road.  We plastered 'em'!"


At the end of the war his unit had performed well in battle and was in excellent condition.  He comments on censoring his men's letters in a letter to Bess, "I had no idea that there were so many accomplished liars in any organizations on earth as I have in mine."  He was responding to their inflated tales of heroism and accomplishment.


He used his time immediately after the war buying a car and traveling widely around France learning as much as he could about the country and the people.  This war experience was to be valuable training for some of the critical decisions he was to make later as president.  In addition there were friendships he made with men who would become valuable supporters later in his life.


Truman stayed in the reserves and left military service 27 years later as a Colonel in the U.S. Army Officer's Reserve Corps.


In another story  I will  discuss what critical decisions Truman made as president. When he left the presidency, only 30 % favored him, but now experts rate him as the sixth best president  we have had!


This exhibition will be at the Truman Library and Museum until December 31, 2018. 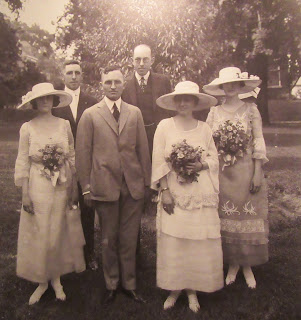 Harry and Bess's wedding following the end of the war.


Posted by Wayne Anderson at 11:12 AM No comments: