In World War II the German's conquered France in 1940 and turned it into a major support system for its war against the Allies.  On a trip to France my son-in-law Dr. Stephen Alan Bourque, professor emeritus of the School of Advanced Military Studies, U.S. Army Command and General Staff College at Leavenworth, became interested in the untold story of what toll the war had taken on French civilians.


In his book, "Beyond the Beach: The Allied War Against France," he tells the story of the massive damage that was done to French civilians and cities in an attempt to contain the Nazi menace. He discovered the allies bombed 1,570 French cities and towns killing 68,778 men, women and children over the course of World War II.   This was greater than the damage done to Britain by the German bombings and attacks with rockets.   More than 100,000 French were injured, and 432,000 houses were completely destroyed.


Immediately on taking over France the Germans built giant bomb proof submarine pens in French ports to protect their subs. These  ports were used to reload and repair the German U-boats after their fights in the "Battle of the Atlantic." One of the cities with a port supporting the U-boats that had been completely destroyed was St. Nazaire on the coast at the mouth of the Loire River.


The Allies bombed the area 200 times during the war and on one date in 1943, 413 British heavy bombers attacked the submarine pens.  Despite this massive attack  the pens  were left intact due to the tremendous amount of cement used in their construction.  On the other hand the bombs completely destroyed the city and killed French civilians, German soldiers and slave laborers who had been sent to work on the area. 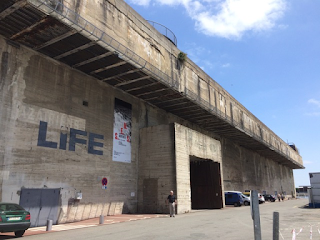 
These submarines (U-boats) were one of Germany's most dangerous  weapons that took a tremendous toll on the supplies and troops being shipped from America to its Allies in England and Russia.  The U-boats sometimes worked in wolf packs of as many as 20 subs attacking our convoys that consisted of 30 to 70 merchant ships with naval protection.


During the war the U-boats sank about 2,779 ships for a total of 14.1 million tons GRT (Gross Registered Tonnage). This figure is roughly 70% of all allied shipping losses in all theatres of the war and to all hostile action.


The most successful year was 1942 when over six million tons of shipping were sunk in the Atlantic. This resulted in heavy loss of life on both sides.  The Germans lost 28,000 U-boat crew and 72,200 Allied sailors and merchant seamen were killed. It became clear that if the mass sinking's of supplies and troops couldn't be prevented the war would be lost.


My daughter Debra Anderson made a trip with her husband, the author, to see the pens that are  open to visitors.


Here is one of her notes.  "Steve wanted to see them for his research.  The day started out cool but turned into a nice day.   At St. Nazaire we went past the city to the west side to see the ocean."


"Steve wasn't sure where the submarine pens were, but knew that the city had been destroyed because of them.   We then drove along the coast into the town.  There were beaches and several monuments along the coast.  We found a parking space and went exploring.   Wow!  We were at the submarine pens and they were so impressive.  They were massive and had proved to be indestructible.   Tons of cement.  We walked around and took pictures.   Just an amazing structure."


"There’s a photo with me in a dark area next to the water.   It’s like a boat dock - a platform with a rectangular space for a boat to pull in or go out to the water.   But it’s a covered area, and what was docked were submarines, not boats.   It reminded me of a James Bond movie where the subs come into secret hiding places."


The number of merchant ships sunk peaked in 1942 with 1,150 ships sent to the bottom of the Atlantic.   England was on the verge of starvation.  The subs had to be stopped.


To do this the Allies had to coordinate their various forces and a central office was developed that took messages from the air, the ground and naval forces.  With antisubmarine intelligence, electronic tracking and attack aircraft the allies set up their own Hunter-Killer Task Groups.


In World War II Germany built 1,162 U-boats, of which 785 were destroyed and the remainder surrendered (or were scuttled to avoid surrender) at the capitulation. Of the 632 U-boats sunk at sea, Allied surface ships and shore-based aircraft accounted for the great majority (246 and 245 respectively).


To see an U-boat in person go to the Museum of Science & Industry in Chicago that has the captured U-boat on which we discovered a German M4 enigma coding machine.   This was to be a gift without price, since now the Allies could decode German messages. 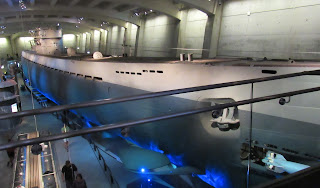